Man of Steel Slot by Playtech

Man of Steel Slot is one of the many branded releases coming from Playtech, a developer that seems to have specialized in launching games that are based on big productions. Sometimes it’s a comic book, other times it’s a movie, like here, where we get the branded slot machine for the 2013 film that had Superman in the main role.

Featuring Superman on one side and General Zod on the other, Man of Steel slot will split the game area into 5×3 reels and will have 25 fixed lines to use there. You will have several features at your disposal, to play with, among which I found: 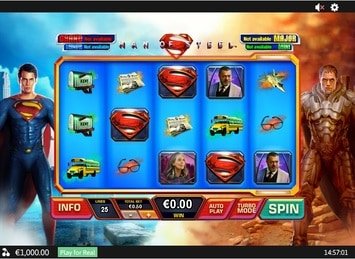 As a branded slot machine that is based on a film from 2013, it will use high-end graphics that are often borrowed from the movie. You get all the major characters as symbols, many of them as wilds, but a couple of high-paying icons as well. There is Superman, General Zod, Jor-El, the warriors of Zod, Superman’s adoptive parents from Earth and so on. The regular symbols are all themed, even the low-paying ones, which show fighter jets, school buses, newspapers, cameras, eyeglasses and mailboxes.

For a game that features 25 lines, the requirement will be to have a minimum of 25 coins, but the bets don’t need to start from $0.25. In fact, Man of Steel relies on a minimum bet of $0.50, which would mean that a $0.02 line bet is available as a starting point. It can be a very expensive game to play, but that’s a decision that you get to make for yourself. The maximum bet will reach a top value of $2,500, which means that each active line would receive $100 in that case.

As a game that is in the DC Comics universe, this is going to have progressive jackpots available. There are four progressives that can be triggered, all of them at random and without any input from the game’s symbols or features. The names of these jackpots, the best of which can make you rich, are Grand Jackpot, Major Jackpot, Minor Jackpot and Mini Jackpot.

If you look just at the rewards that will come your way via regular combinations, there are some that will pay 1,000 coins, and with 25 lines active you could end up with rewards of 25,000 coins in a single round. A regular combo could pay as much as $100,000, given the right line bet.

As Playtech needs to pay for the license, same as in every other branded slot, they must pass on some of that cost to the players, and so the game doesn’t have the greatest average RTP, the official figure being for 95.05%.

This slot has about five different types of wild symbols, each one showing one of the major characters from the game or a logo. You have Superman, General Zod and several villains used this way, while the regular good characters are just your average symbols. Each of those wild symbols will be paying up to 1,000 coins when they’re forming a winning combination.

Superman vs General Zod Shifting Wilds will trigger whenever the two wild symbols appear on the reels. While you will get Superman to move towards the right side each round, by one spot, General Zod will go to the left.

Having Superman and General Zod appear on the same row will give you a Battle for Earth Free Games feature. The free games will have four Shifting Wilds now, including Superman, General Zod and the two warriors accompanying the villain. Whenever you get Superman on the same row as one of the others, a clash will occur and they will fight on the reels. Additional wilds result from each battle. Once Superman is defeated, the free games end.

There is a second way to get free games, through the Krypton feature. It needs a Krypton Bonus symbol on the 5th reel, and in exchange, it delivers 7 free games to you. These free spins have 50 pay lines and symbols that pay more. The reels also expand for the occasion. Jor-El will be a wild here, and it will lock in its position when appearing. You can get up to 10 Jor-El wilds locked on the reels and you can also retrigger the free games.

There is another bonus symbol that can behave as a scatter, and its simple presence on reel 5 will be sufficient to activate a bonus game called World Engine. A terraforming blast will unearth additional wild symbols. At most, you can get 7 extra wilds on the reels from such a blast.