One of many Ancient Greece inspired games, Mighty Aphrodite slot, manages to have a unique feel and design. Overall, I found it much more entertaining than its many competitors. A beautiful Aphrodite, sporting an outfit worthy of a modern-day exotic dancer, is your main character and constant companion in this new Rival Gaming slot.

The layout isn’t the one that will be surprising here, as it has a standard 5 reels occupied by 25 lines. Once you check out the features, you start to see some interesting things: 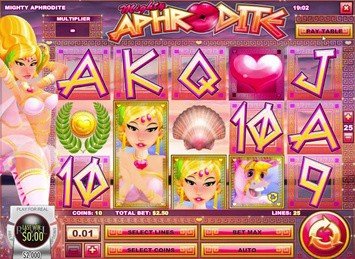 The Goddess of Love herself is the star of this game, Aphrodite being shown here as she’s never been before. With an image of the Mediterranean Sea in the background, at sunset, we see to the side a constantly animated Aphrodite, a blonde woman with tall hair, wearing heart-shaped jewellery and a gold and pink/white outfit which would be equally appropriate if worn by a modern exotic dancer. The sexy look is definitely something that Rival Gaming was going for here, but luckily they didn’t insist too much on it, so it’s still tasteful.

With the exception of Aphrodite, as a companion next to the reels and as a double-stacked wild, the rest of the images are more typical for this type of slot. Major symbols have a funny-looking Pegasus to show off, along with pink hearts, laurels, a harp, an amphora, seashells and olives. Less ambitious symbols are the ones showing us the six Royals, which are designed to resemble Greek letters.

The production value is very good in Mighty Aphrodite slot. Rival Gaming outdid themselves in this case, offering us a theme that others haven’t managed to make very attractive. Having Aphrodite as a model certainly helped make their job easier, but it’s clear that they put a lot of effort into this game. 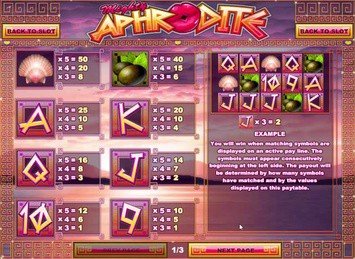 Mighty Aphrodite slot doesn’t innovate. There is nothing new in its list of features, but the game manages to be fun to play despite this. It offers things like stacked wilds or multipliers, both contributing to making the game profitable.

Aphrodite Stacked Wilds are among the feature symbols that you will find on the reels most often, and they are typically occupying two positions on the reel. You might see only the top or the bottom of the stacked Aphrodite if it’s only partially visible. Having a stacked wild symbol means that you get better chances to form new combinations, as you use it in the role of the substitute on multiple lines at a time. All other symbols are replaceable with wilds if the end result is a winning line.

The best possible situation is when you get five Aphrodite icons on the same line, as at that point you’re getting their own combo and a 500x reward.

Cupid’s Multiplier is not a feature that comes your way via symbols, rather something random that is out of your control. When it does trigger, through whatever random mechanism the game uses, it will have Cupid appearing on the screen and shooting his arrow, taking the multiplier to as much as 5x.

The features we’ve seen so far are already fun, but the game doesn’t stop there. The Pegasus Free Spins will be activated via 3, 4 or 5 Pegasus icons, symbols with images of pink horses with golden horns and a funny look that’s almost donkey-like. Those symbols get you 7, 11 or 21 free spins, which are also re-triggerable.

The betting system has a certain Rival Gaming flavour, being done in a way that I’ve seen a lot of times before in their slots. Besides the fact that you can select as many of the 25 lines as you’d like, the system also employs 1 to 10 coins for each line, with small denominations that only range between $0.01 and $0.25. Depending on how you use these different options, your bets could be worth between $0.01 and $62.50.

With some help from Cupid’s multipliers, Aphrodite herself can bring you individual winning combinations worth up to $6,250. As a stacked symbol, it’s not at all hard to get multiple wins at the same time from her.

With an RTP that’s set up to pay 94.31% for the game’s entire life, Mighty Aphrodite slot has at least one area where I would’ve liked to see some improvement.