Review of Motorhead Slot by NetEnt

Music-themed video slots have become very popular in recent years and it is these games that allow players the chance to experience some of the world’s most famous bands in a unique way, as well as stand the chance of getting their hands on some great prizes at the same time. To set the stage, the Motorhead slot boasts symbols that include cherries, four-leaf clovers, lucky horseshoe, bells and Lemmy himself. 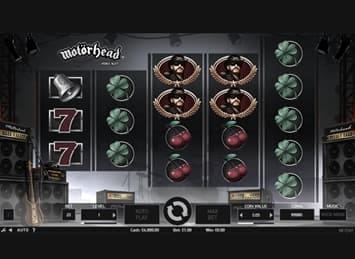 The Motorhead slot by Net Entertainment is one such game and this 76 pay line video slot is themed around the English band of the same name. The title comes complete with a Motorhead soundtrack, including song titles such as Iron Fist, Ace of Spades, Overkill and Killed by Death. It is the music that really brings this slot to life and allows players the chance to get in the mood for some big wins.

It is not just the graphics and the great audio that sets the Motorhead slot apart from many of the other slots on the market. The wild symbol, for instance, is represented by the Ace of Spaces and this replaces all other symbols, except for the scatters. The band’s logo represents the scatter symbol and it appears only in the base game. When 3 of these symbols appear on the reels, regardless of position on the third, fourth and fifth reels, the free spins feature is activated. The free spins round allows players to benefit from no fewer than 10 free spins. While the free spins round might be thrilling, it should be noted that this round cannot be retriggered.

Another exciting bonus is the mystery symbol, which appears during the base game. During a spin, one or more of the reels can be turned into mystery reels and these have the potential to contain stacked mystery symbols, as well as the regular ones. When the spinning reels come to a stop, those mystery reels that are present can be transformed into one of the regular symbols.

The bomber feature is triggered randomly, and when this happens, bombs appear on the reels and form 10 mystery symbols.

Players can bet between 0.01 and 1 in terms of coin size. In the event that players want to take full advantage of every spin, they can use the “max bet” button to bet the highest possible amount. Players can also choose between “autoplay” and “spin” to set the reels in motion. The first set the reels in motion on the player’s behalf, while the second will spin the reels once per click.