Review of Narcos Slot by NetEnt

Announced many months in advance of its release, Narcos was a big deal for NetEnt, as a slot machine which is based on a top-rated TV series from Netflix. It’s not the only high profile branded slot around, but it’s definitely one of the top ones, in terms of subject popularity. They’ve done an excellent job with the game, and particularly the implementation of the design, which borrows from both the movie and from a Grand Theft Auto-style look. The slot that they came up with relies on 5×3 reels and 243 ways to win, quite the common option among developers right now, but a good one nonetheless.

As for the big features that have been implemented, Narcos is actually quite rich in options, and there is no shortage of things for you to do and get: 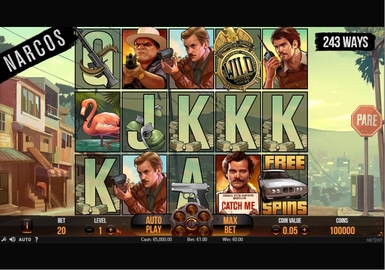 Themed around Narcos, the TV series from Netflix that covers the life of Pablo Escobar, this slot machine manages to turn it into a video game of sorts, at least if we go by the way the symbols look. It’s been compared by many with the kind of look that we found in Grand Theft Auto video games, in a cartoon/comic book style. It’s not quite using images from the movie, but it’s close enough to the real thing, that nobody will mind. In fact, I’d say that its current look is an improvement.

The symbols include the DEA Badge Wild, scatters, four of the actors and characters from the series, along with guns, Cessna planes and Royals.

Using a mix of regular and random features, most of them with something extra to offer compared with other games, Narcos ends up being the type of game that has no problems keeping you busy. Even better, as the winning combinations form via ways to win, it’s enough to get 3+ matching symbols left to right on consecutive reels.

Wild Symbols: One of the three symbols that the game will use to create its top winning combinations, the Wild is going to be used as a replacement as well. If you’re lucky, you get paid up to 15x the stake for having five wilds on the same line. Perhaps not as lucky, but still good, is when you get even a single wild to appear alongside enough regular symbols so that they can form a lower-paying win together. Please don’t count on the game using these wilds to trigger any features; they are only to be used as substitutes for regular symbols.

Drive-By Bonus: Among the features that will spice up your game, and one that you don’t even have to trigger with symbols, the Drive-By is something that you get at random moments. It will simply involve the appearance of a cartel car, and one of its thugs will start shooting towards the reels. Any symbols of high value that get hit will be transformed into additional wilds for the current round.

It’s not a feature with huge potential, but you might get several high values wins out of it, and that makes it great to have around.

Locked Up Bonus: You also get bonus games that can be triggered via scatter symbols, and here I’m talking about the one called Locked Up. It’s going to involve a feature with 3 re-spins and cluster-style wins, where you get either Locked Up or the golden version of that symbol, to appear.

If you get the Golden ones, then they can apply up to 3x multipliers, they can upgrade the value of symbols by up to 7x, and they can boost the starting prize as well.

Re-spins will reset when you get new symbols added to the game area.

The odds of this feature triggering is 1 in 124 spins, while its potential is to pay up to 271x the stake at most.

Free Spins: Next, we have the free spins, another ubiquitous feature that we get in a lot of different slot machines these days. To trigger this one, you only need certain scatter symbols landing at the same time, on the 1st, 3rd and 5th reels. You receive 10 free spins from this. It’s going to be tough to do though, as the odds tell us that only 1 in about 351 rounds will bring you this feature. On the other hand, the potential for it is a lot higher than everywhere else, and it’s here that you can get paid up to 1,506x the stake.

To the game’s higher winning chances, will contribute the extra features that are included with it.

Drive-By is one of the features available inside, active for every single round you go through.

Walking Wilds is the other one offered, with wild symbols moving one position at a time on the reels, until they leave the game area. If the free spins reach their end, and there are still Walking Wilds insight, then the feature continues until there are no more visible.

If we look at the betting system that’s being used, we find one that NetEnt has implemented in many of their games. For this particular slot, they chose a 20 line setup (considered sufficient to activate the 243 ways to win), allowed for a maximum of 10 coins to be wagered on each one, and then for the coin value to go from $0.01 to $2. The result is a betting range of $0.20 to $400.

If there is one area where I feel that the game could’ve been better, is here, when it comes to its payout potential. 1,506x the stake is the biggest prize that the slot promises to pay, which is an average amount by the industry standards. It’s understandable though, since the game has medium volatility as well, so it tries to strike a balance between the jackpots it will deliver, and the amount of risk that’s placed on the player’s shoulders. Given the wagers allowed, the slot’s top prizes can still end up paying over $600,000.

Other than that, it’s also worth noting that the RTP is 96.23%, which is above the average but not by much. Once again, just good enough.

Verdict: Narcos is a big production for NetEnt, and it shows. If you look at its graphics, animations, sounds, even features, the package is an impressive one, and I do not doubt that the show’s fans will get a kick out of playing with their favourite actors on the reels.

Where I feel the game doesn’t do as great, is in giving the players a big top jackpot to look forward to. I understand why, they had to keep the volatility low enough that the game was appealing to all fans of the show, not just to those that are used to big gambles, but that’s one area where they might’ve benefited if they would’ve tweaked the game a bit.

Overall, it’s a game that’s highly recommended to a fan of the series, and even to those that are not familiar with it.