When it comes to unique themes and interesting game elements, the Ninja Magic slot has it all and this is partly because of the great software company behind this title. The game not only offers players something different in terms of storyline, but it also boasts everything that players have come to expect from a Microgaming title, including great graphics and even more exciting bonus features. Players who are looking for great gameplay, exciting features and the promise of walking away with some really thrilling cash prizes will need to look no more. 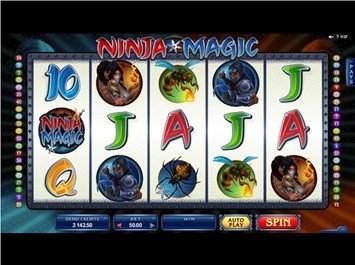 The Ninja Magic slot takes players back to the world of bug fighting ninjas and it is jam-packed with a variety of exciting features. The game follows two ninjas who are searching out the Temple of Great Fortune, and the cartoon-like graphics really set the scene for a thrilling experience. A male and female ninja make up the main characters within this game, and it is them that will lead players into a world of adventure, where anything is possible and riches are just around the corner.

These ninjas carry armour and weapon and they must battle a variety of insects in their search for their treasure, which is located in the Temple of Great Fortune and guarded against winged foes of all kinds. The 40 payline, 5 reel slot offers players wilds, scatters and multipliers, as well as a jackpot of no fewer than 60,000 coins. This is a sizeable jackpot by any definition and it is just another facet that has made this slot one of the more tantalizing titles on the market.

The bonus rounds are part of what makes the Ninja Magic slot so exciting. A 60,000 coin jackpot is up for grabs to the adventurous player who is willing to test the odds against some truly terrifying opponents – an assortment of bugs. This is a truly impressive jackpot and it is another reason why players will continue to spin the reels of this exciting slot. The Temple of Great Fortune is being guarded by these winged monsters and it is up to the players to ensure that they do not stop the heroes from claiming their just rewards. Some of the insects that players can expect to come across include spiders and wasps – ultimately, these are the creepiest of the insects within the insect world, and this adds something else to the game.

Along the way, players have the opportunity of claiming free spins, complete with multipliers. The free spins feature begins with the appearance of three, four or five of the dojo symbols. The Ninja Magic symbol represents the wild, and when this appears, it substitutes for all other symbols.

Playing the Ninja Magic slot is relatively simple and starts when the player selects their bets by adjusting the coin value and the number of coins bet on each line. Players can then start the reels in motion with the “spin” button, or have them spinning for a number of times on their behalf with the “autoplay” button. The simplicity of the gameplay ensures that players do not have to spend very long learning how to play – they can simply jump right into the game.

When playing the Ninja Magic slot, players can bet between one and five coins per line, as well as between 0.01 and 0.25 in terms of coin size. This is a fairly sizeable betting range, allowing players the chance to increase their bet size quite sizeable in the event that they feel the need.