Nirvana, as a slot machine, in this case, tries to take us to a land that’s ruled by three goddesses, which players try to pursue in order to take advantage of the features that they have to offer. It’s not a common theme for a slot machine, but that’s what makes it interesting, especially as we’re getting high-end graphics in this Yggdrasil Gaming release.

Like a lot of other games designed by this developer, the layout involves the use of 5 reels which get 20 win lines. Several interesting features are offered inside, among which you will discover: 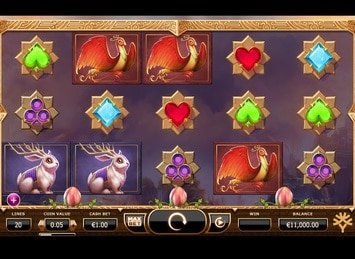 The theme is already an unusual one, so combined with the usual beautiful graphics offered by this developer, you could only end up with a gorgeous slot machine. You have on the reels symbols that seem to show you creatures that live in Nirvana, including snakes, peacocks, rabbits with deer horns or squirrels with heads of owls. As unusual as some of the symbols may be, the graphics are top-notch, making it a pleasure to play through the slot.

A very simple, but important feature, is the “Wild”. It’s not a particularly important version of the feature since it’s usable as a replacement for other symbols only, nothing else. It doesn’t pay you on its own and it doesn’t take the place of the scatter, so the only way to take advantage of its presence is to have it appear on an active line next to matching symbols so that it can substitute for the missing piece. You get help with various winning combinations, over a longer period of time, and that’s the way that the wild becomes an important feature, by helping out little by little.

You will find it easier to see the value in the “scatter” in this case since the Lotus Flower symbol appears in all positions, and whenever you get at least three you trigger 10 free spins. 1,000 or 5,000 coins are also rewards that you can hope for, provided that four or five Lotus Flowers acted as triggers that round. Re-triggering free spins are even easier since even two scatters can get you 1 round at that point.

There are three versions for the free spins, depending on the type of extra feature that you want active for the 10 rounds. You pick the feature yourself, depending on what kind of win frequency, win potential and chance to re-trigger you want to have. Wondering why re-triggering the free spins are so important? Well, if done with 3+ symbols you get to add to the extra features available for those rounds, so you could even end up with all three features active after two re-triggers.

The three extra features start with the Wild Seeds, which have the highest win frequency, adding 2 to 4 wilds to the reels in random spots. Next comes Mega Reel, where the win potential is higher, but it doesn’t trigger as often. In this case, you get three synced reels in the middle. For the third feature, you get the Nudge Reels, which give you the best chance to re-trigger the free spins. Here, you get one reel nudged down or up, in order to improve the current outcome of the spin.

As a result of having 20 pay lines in use, Nirvana will not start spinning its reels for an amount smaller than $0.20. That’s the minimum amount needed to start playing, but should you want to spend more, you can increase the coin value to as much as $5, so the total could end up at $100 if you wanted to.

In Nirvana’s case, the one paying the most is the scatter symbol, which offers up to 5,000 coins, or $25,000. Even beyond this top jackpot, the game can pay very well long-term, enough to end up with a 96.20% theoretical RTP at least.