While Yggdrasil had plenty of cool games in the past, this is the first time that they’ve had a branded release on their hands. I think they did a great job, and we will take you through all their decisions inside. First, Nitro Circus slot has gone with a setup which has 5×4 reels, along with 25 active lines. The gameplay is interesting, heavy on the features, and I love the variety that comes through that side of it. The action takes place at the circus, and there is a motorcycle jumping from one side to the other in the background, along with the members of Nitro Circus as top symbols.

Once you spin the reels of Nitro Circus slot, some of the cool options you might run across will include: 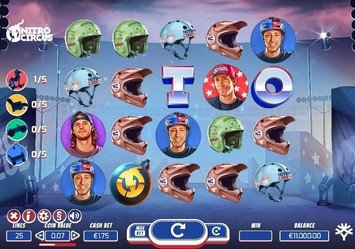 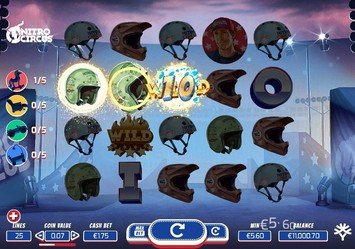 I’ve mentioned it before, that this slot is inspired by a real-world circus, though not a typical one which has animals and acrobats as performers. Instead, it relies on daredevils, bike-riding stuntmen and other similar acts, mostly involving powerful machines.

The members of the team performing in this show will appear among the game’s symbols, in photos which were retouched to look better in a game. You can still recognize them as real photos though, and the end result is pretty good. Besides the four symbols of high value, showing just as many characters, the game also relies on three Helmets, icons which are designed for the air force, motocross or skating. The icon showing Travis Pastrana, the show’s lead, will pay up to 20x total stake in a combo.

There is a long enough list of features for you to explore, though quite a few of them are the extras which could trigger for you in the free spins mode. Overall, the feature list is one of the things keeping the game fresh, as there is a lot going on.

The usual substitutes are present, symbols which you can use in forming new combinations, though they still need to appear in the correct position for that to happen.

With 2 scattered Nitro Bombs on the reels, you get a mini game with a pick to make. You choose one bomb out of five shown, to reveal either free spins, a collection item, exploding wilds or multipliers for the free spins.

If you land at least 3 Nitro Bombs scattered, the slot gives you the free spins, along with up to three feature picks.

To get to this part of the game, you need to collect five matching vehicles, or as an alternative, you can also do it via NITRO letters forming a word on the five reels. The jumps which follow could bring you rewards or free spins.

You will be able to set up a bet for 25 lines, using only the coin value as the element which changes. It starts from a minimum of just $0.04, and it is capable of going up to $5 per line. Given the 25 fixed lines involved, you are spending between $0.10 and $125 each round.

While the base game has top payouts of 500x total stake to give away, things can improve considerably while the free spins trigger, provided that you get its multipliers to boost the wins as well. The potential of Nitro Circus slot is to pay up to 2,000x total stake, which would be worth $125,000 at most. I’m quite impressed with the RTP announced for it, since at 97%, it’s above the average of the industry.

There are a lot of features for you to enjoy in Nitro Circus slot, so this branded game will not allow you to become bored. I think that the RTP is a major strength for it, and the 2,000x payout is not bad for a slot with medium volatility.