Northern Sky slot, a release that’s delivered by Quickspin, will try to bank on the legendary beauty of the night’s sky in the Northern regions. The Aurora Borealis, or the Northern Lights as it’s also called, will have a lot to do with that beauty. The slot creator came up with this very unusual design, which puts wild animals on the reels, but in the form of gemstones cut to their particular shapes. They ended up with a slot with a beautiful design, modern and easy on the eyes.

Playing with just 9 bet lines on 5 active reels, Northern Sky slot will give you fewer opportunities to land a prize than you might expect. Several interesting features will make time fly in its case, among which I’d mention: 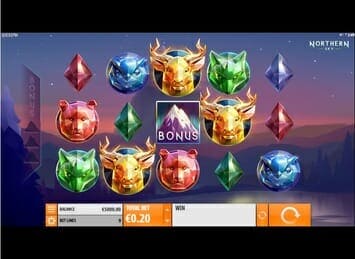 Scandinavia’s sky appears to be the inspiration in Northern Sky, the creatures placed on the reels being typical of those regions. The implementation is not the regular one, so you get gemstones cut to their shape rather than getting wild animals. You have deer, wolves, bears, and owls as high-paying symbols and simple gemstones for low-paying ones.

If you’re looking at its features and you’re wondering where the wild symbol is, the answer is that you’re not going to find one. This is one of the few modern slot machines that don’t use this particular feature, and it seems to do just fine without it.

On the other hand, you’re still going to find the free spins inside. They trigger as in other games, via scatter symbols. Look out for Bonus symbols in the game, the ones also showing you a mountain in their image. Get three or more and collect them in the special Bonus Meter, and you trigger 10 free spins. A big advantage of the free spins that Northern Sky slot offers is that they have only high-paying symbols on the reels, meaning the ones with wild animals. The low-paying symbols are removed, which improves the chances of you getting a win, making them more valuable on average.

Though the features that I mentioned so far are interesting, I really love the Respin. It’s going to be triggered every single time that you have winning combinations formed. Once the wins have been paid for that round, the involved symbols will be locked in their positions. The Respin that follows will bring new symbols to replace the ones that aren’t locked. The result can be an improved winning line and extra payouts. The respins continue for as long as you keep getting additional symbols for your combinations.

Northern Sky slot will be an impressive release for many players in graphics and some of the implemented features. I think that you will especially want to check out their Re-spins, and luckily they trigger quite easily.

The games that Quickspin typically puts out tend to have similar betting systems in place. It’s visible in the Total Bet section, which you click on to open it up. The pop-up menu will have a fixed number of options, with values ranging from $0.10 to $100. If the number of lines, 9, doesn’t seem like it fits with that wager, that’s because the game looks at the total bet only, not at the line bet.

With the maximum bet selected, the paytable will display the exact values that you’re going after. The listed potential wins don’t go very high, $4,000 being the best combo you can form, but you still have a 96.57% average RTP out of the slot. That seems like a testament to the implemented features, and we’re going to cover them next.