Ozwin’s Jackpots appears to be telling the story of a magician’s apprentice, placing the action in a world of fantasy. Yggdrasil Gaming is the one that’s telling this story, and they do it via a beautifully designed slot machine. The graphics are definitely among the things to notice about this slot, but they’re not the only ones.

As part of Ozwin’s Jackpots slot offer, I’d like to mention the 5 reels that get 20 active lines first. The list of offers might start there, but it doesn’t end too quickly, including five progressive jackpots among others. Features that they decided to implement for it include: 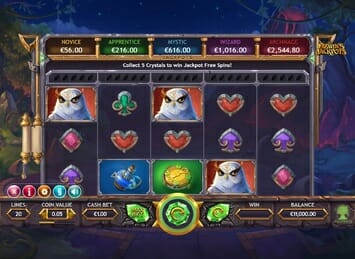 A gorgeous design is available in Ozwin’s Jackpots slot, and as I’ve said before, it’s a magical world that it’s trying to show us. Expect from it to show you things like spellbooks, orbs, potion vials, along with the image of the wizard and his trustworthy owl. For the final four symbols, the ones that pay least, they’ve gone with card suits that are made out of gems.

In a manner that seems typical for Yggdrasil, the slot will require 20 coins from your bets, sufficient for it to cover 20 active lines. The coin value is the sole setting that you may change when you need to, taking them from a minimum of $0.01 to as much as $2. There is a complete betting range of $0.20 to $40 here.

Finally, we get to the jackpots that are possible inside. One of the mentioned features will trigger progressive jackpots for you, and from largest to smallest in value, they’re called Archmage, Wizard, Mystic, Apprentice and Novice. If you can’t get those, then the two main features can pay up to $20,000. The RTP we know that it’s above 96.5%, which is slightly better than the average these days.

When you hear that the game only has a bonus game and free spins, you might be tempted to think that it’s a bit light on its offerings. It’s not really the case, though, with the two that I mentioned being both well-designed and capable of paying big prizes.

To start with, the Jackpot Free Spins are activated through scatters of their own, symbols which show a Blue Orb and which are marked with the Free Spin logo. Have them appear at least three times, to receive access to 10 free spins. Four or five symbols in view will get you paid 1,000 or 10,000 coins, respectively.

Once you’ve started playing through the free rounds, you can collect Jackpot Orbs and Free Spin crystals. Get 5 matching crystals to win 10 free spins and 1 orb. To win a progressive jackpot, you need 5 identical orbs to be collected. It doesn’t even stop there. On top of all the other features, the free spins will also get 3x the usual payouts, thanks to multipliers.

As I’ve mentioned, there is a second feature possible, the Spellbook Bonus Game. Have its symbol land in three to five positions, to trigger the bonus game, while four or five will also pay 1,000 or 10,000 coins. The Bonus feature revolves around choices that you make, revealing spellbooks, coins, crystals and evil spells. The feature ends when you find the evil spell option.