Review of Ozzy Osbourne by NetEnt

NetEnt is no stranger to good slot machines, and they have a large collection of games that are high profile, quite a few of them branded. Ozzy Osbourne is not even their first rock-themed slot machine either, as previously branded slots of theirs were based on Motorhead, Jimmy Hendrix or Guns n Roses. Once again, they’ve outdone themselves designing a slot machine that’s based on Ozzy, legendary heavy rocker which was also nicknamed Prince of Darkness. The design they’ve gone with follows that nickname and builds on it, and I think that they’ve done an excellent job turning his brand into a real game. All along, there will be real music from Ozzy playing in the background, so this is a game for the artist’s fans.

The game area they went with features 20 paylines on 5×3 reels. A good design is not all that is offered here, and the features will play their role in trying to get you to have fun playing this slot: 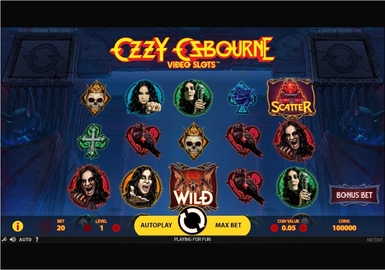 Ozzy Osbourne is a branded game, that’s obvious immediately, as the legendary rocker and lead vocalist of Black Sabbath is the one that appears in all major symbols. At the same time, several of his well-known songs will play in the background. The design is a darker one, but that’s OK in a slot machine that’s based on a hard rocker, the type of guy that shocked the world by biting off a bat’s head on stage.

The symbols that will be used get you four icons with Ozzy, plus the four card suits decorated with ravens, skulls, a cross and a rose.

A game that doesn’t make it too difficult for you to get wins is always appreciated, but a fun slot machine will do a lot more to keep you interested, changing things up along the way. Ozzy Osbourne is the type of game that manages to do that, and it delivers a mix of features which revolves around scatters and re-spins, wilds, multipliers and free spins, many of them coming via the Symbol Charge-Up. Read on to find out how each one works.

Wild Symbols: At any point in the game, you can get the Bat Wild symbol to appear on the reels, and to act as a substitute for any of the regular symbols. It’s not going to be useful as a replacement for a scatter, but I wouldn’t expect that from most wild symbols anyway.

Symbol Charge Up: This is a feature that you can get during re-spins and free spins, both described below. If activated, the Symbol Charge Up will first pick one of the symbols from the game, and then it will select a feature which will be associated with it, for the duration of that feature. You will not be able to get wilds selected by the Symbol Charge Up, but all others are fair game.

Once the symbol is selected, you get a feature spinner to give you something extra for it. The options here include:

Free Spins: Now that I’ve told you about the Charge Up and the kind of benefits that it can bring you, it’s time to find out how you can get it. For that, you need either re-spins or free spins to trigger, during which the Symbol Charge Up is active.

For either of the two, you will need the Throne Scatter. If it lands only on two of the three reels where the scatter can show up, then Re-Spin triggers, in an attempt to get the final one required.

If you have all three Thrones on the reels, then the free spins will trigger directly. You can also get this mode by landing the scatter symbol through the feature spinner, during re-spins.

You receive 4 free spins if you’ve been using the regular bet, or 5 free spins if the Bonus Bet was selected. Before each round starts, you will get the Symbol Charge Up to activate. In each case, you get a symbol and a feature for it, from the ones mentioned above (coin wins, multipliers, extra wild or upgrade).

Bonus Bets are activated by clicking on the red button, shown on the right side of the screen. This doubles the amount wagered, taking the coins from 40 to 400, and the total bet from $0.40 to $200. In exchange, you get a better chance at triggering features, more free spins, and bigger multipliers. The odds of getting the free spins go up from the original 1 in 259 rounds, to 1 in 140, so almost double.

With a branded slot machine, the developer wants it to appeal to as many people as possible, both beginners and experienced, so I find that there aren’t a lot of very high volatility games around. It’s probably why Ozzy Osbourne is a medium volatility slot as well, a game which compromises and tries to offer a bit from both worlds. Its payouts are then going to be good, at up to 2,500x the stake ($250,000), but there are plenty which will go even higher.

I like that they managed to include an above-average RTP for this game, which at 96.67% is better than the vast majority of the games you typically see.

Verdict: It’s a game that is supposed to appeal to the fans of hard rock, and Ozzy in particular. Ozzy Osbourne features the right graphics, original soundtracks, and a collection of features that will provide you with plenty of excitement along the way.

I enjoyed the game, and thanks to its medium volatility, I think that most will be able to give it a try and have fun with it. I wouldn’t expect it to be enjoyable for everyone, and it’s not a game that will revolutionize the slot machine genre. However, if you like Ozzy Osbourne, you will like what it offers.