Pied Piper by QuickSpin is a video slots game based on the legend from Hamelin, Germany. The Pied Piper story has been around for ages and is about a Pied Piper who could control mice and children with his magical hypnotic pipe. Children from all over the world have been fascinated by this story which revolves around a musician who plays his pipe to help out a town with a rat infestation by hypnotizing the vermin with his pipes and making them run away.

The game itself is a Middle-Ages-themed online slot machine game that’s playable on all devices and uses iconography related to the Pied Piper of Hamelin, including icons for the Piper, the children of Hamelin and even its mice. The online slot involves standard-fare icon matching with a few twists that combine bonuses in a few spots. 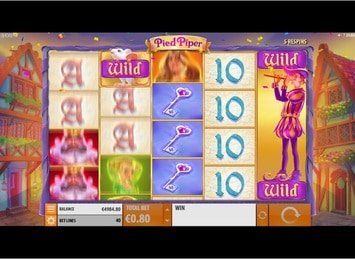 QuickSpin’s Pied Piper is a 5-reel, 40 pay line slot machine game that can be played with stakes ranging from 20 pence to £100 per spin. It’s playable on desktop computers, laptops, tablets, and smartphones. Aside from being based on a fairy tale, the Pied Piper slots game also showcases cartoon designs from the Middle Ages specifically Medieval Germany.

Pied Piper comes with animated graphics and even a music score since it plays the Pied Piper’s theme tune every time you spin the reels. The Pied Piper character is essentially taken to the town of Hamelin for the sake of driving the mice away, with your every spin deciding the effectiveness of your pipe tune within the game and the size of your reward outside the game.

The gameplay benefits from having a rewarding bonus system, allowing you to get things like Piper re-spins and the Mystery Re-Trigger feature where you can get 5 new re-spins at every turn, and a Free Spins System where you can get up to 6 Mouse Wilds on each free spin on top of 10 free spins.

You can also win 20 times your stake if you get 5 Mouse Wilds on a pay line. The Mouse Wild replaces all icons (except the bonus scatter and Piper Wild) whenever it comes up. The Mouse Wild is also 1of 2 wild symbols, the other being the Piper Wild, which is the main symbol of the game.

The Piper Wild replaces all symbols except the scatter when it’s at play. When it lands on the reel, it’ll trigger the Piper Respins, where you’re given re-spins with any Mouse Wild, walking 1 reel to the left every time until the Piper Wild reaches the 1st reel.

Aside from matching the icons with the right combination to win a reward or hitting certain icons that give you special bonuses like re-spins and free spins, Pied Piper’s gameplay is pretty similar to most online slots and is not very complicated. The symbols used in the game include the 10, Jack, Queen, King, and Ace playing cards from all four suits (Hearts, Aces, Spades, and Clubs).

It’s the king that has the highest value among the symbols (think cherries in your typical old-timey fruits-based slot machine game). If you’re able to get the king 5 across a pay line, you’ll receive 10 times the stake you’ve given. It’s essentially your jackpot combination.

Pied Piper is an entertaining online slots machine game because QuickSpin has used clever and engaging gameplay mechanics to keep you on the edge of your seat. You’re not only gunning to get 5 of a kind of any given symbol to acquire a payout. You’re also depending on an involved bonus system that can give you from 10 to 20 times your original stake.