Planet of the Apes Slot by NetEnt

The Planet of the Apes online slot machine game was developed by the NetEnt, one of the leading casino gaming software developers. This online licensed slot is partially inspired by French author Piere Boulle’s famous novel and the iconic film of the same name that starred Charlton Heston in 1968.

Planet Of The Apes Slot Details 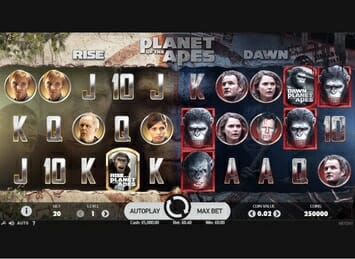 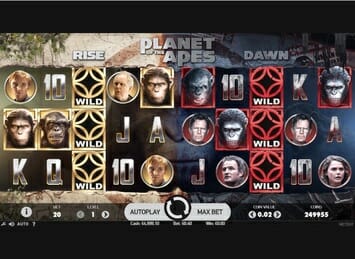 Planet of the Apes comes with five reels, three rows, and 20 pay lines. The gaming fields are named after two episodes of the latest installments of the franchise: Rise and Dawn.

There are betting levels involved and the coin value of the game ranges from one cent to one euro. You can go from up to twenty cents to two hundred euros for every spin. The game has separate sets of symbols such as wilds free spins, scatters, bonus rounds and special features for the Rise and Dawn gaming fields.

When it comes to bonus rounds for Planet of the Apes, the game has a Rise Bonus wherein you can get an extra coin for each ape and man icon found at the Rise screen. As for the Dawn Bonus, this happens when all the apes and people symbols at the Dawn zone turn into a special type of symbol that’s picked randomly. Here, you can win up to 1,200 times your stake.

In regards to free spins, they also come in two flavors. Rise Free Spins involve ten free spins of five reels at the Rise field wherein the bet amount remains the same and all wilds are cumulative. Dawn Free Spins has 15 free spins from the Dawn field, with extra symbols for Extra Free Spins, Extra Wilds and Multipliers involved.

These symbols can then trigger different prizes depending on the combination. With Stacked Wild, if any reel at the Rise screen is full of wilds, then this is reproduced on the same reel of the Dawn field. The game also has Dual Feature wherein a basic symbol is picked from both fields then if an icon drops out at its screen it becomes “sticky”.

Characters from the movies, including apes and the main actors are used as iconography in the online slot. Apart from this, you have your standard playing card symbols from ten to ace. The basic symbols form combinations from left to right at the active lines. Chains of three, four, or five of the same symbols, icons, or elements must start from the first left reel before making their way to the right.

There are exceptions to this rule as described with how you can activate certain features and bonuses. Payouts for each successful spin are calculated by indexes ranging from x10 to x600. These multipliers are activated by the bet per line. A single spin can potentially yield multiplier wins but usually, it takes multiple spins to get the multipliers.

Casinos with Planet of the Apes Slot