There’s no doubting the fact that there are a lot of different roulette games available at online casinos. In fact, it may be the one game with the least variation that there is the most of overall, and it seems like most major software developers have at least one and as many as 10 or 12 different styles of it that are more or less fundamentally the same. The Premium French Roulette tables designed and offered by Playtech break the mould as much as possible and stand out as being one of the best that the industry has to offer.

What Makes This Title Stand Out 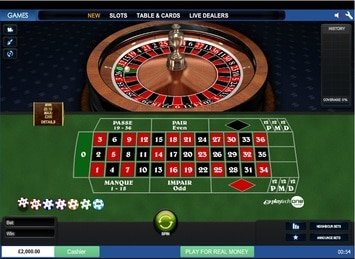 There are two main aspects of this particular roulette game that Playtech has combined to make this title stand out. First is the visual presentation. The graphics look excellent, and the table is set up in a way that makes it clear which bets you’re making at any given time and what the odds are. All you have to do is hover the mouse over the inside part of the table to get payout information, and if you hover over the bets on the outside part of the table, then the numbers that will win for that particular wager will become highlighted for clarity and simplicity.

The second point we’d like to make is that this game uses the true French roulette rule known as “La Partage” to stand out from other single-zero games. A lot of people know that single-zero games are better than double-zero games, but many don’t realize that La Partage roulette is even better. The La Partage rule says that even money wagers have you only losing half of your bet if the ball lands on the green zero, and that drops the house edge down to 1.35 percent on those wagers from the 2.7 percent that they normally would be, making it one of the best bets in the whole casino.

First and foremost, let’s take a look at the basic things that you need to know if you’re going to play this game. Betting is set up so that you can place wagers starting as low as £0.10 on any available bet in the game. However, the maximum available wagers depend on which type of bet you’re making. For a straight-up wager on just one number, the maximum is £200, but it becomes £400 on a split bet and £600 on a street bet, which is also known as a row bet on three numbers.

A corner bet, which is one of the most popular mid-volatility options that players tend to use online, will give you an available maximum bet of £800, and it jumps up to £1,200 for a line bet on six numbers. Double the available ways to win to 12 for the column bets or dozens of bets, and you’ll be able to bet up to £2,000 at a time. Finally, all of the even-money bets like black, red, even and odd allow you to wager as much as £4,000 at a time.