Rainbow Reels slot has been created by Novomatic, through its online game development subsidiary, Green Tube. They’ve released this luck-themed game for the online market only after proving that it’s a success in regular land-based casinos. Now, Rainbow Reels and its multiple features are available for use at online casinos as well, and it comes with several pros to its name, but there are cons as well.

To find out whether luck is on your side or not, all you have to do is spin the 5 reels with 1 to 20 lines active on them.  There are OK(ish) rewards delivered through individual wins, but there are several cool features as well to be triggered: 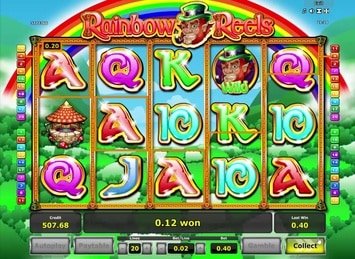 The theme in a game about rainbows could only be related to the Irish and their legends. The story mentions the leprechaun that hides his pot of gold at the point where the rainbow touches the ground, and a lot of designers have tried over the years to create unique designs for slot machines that have this story. Rainbow Reels slot doesn’t try too hard to deliver unique visuals, so, for the most part, you’re getting the expected icons. There is the leprechaun in there, along with pots of gold, a wishing well, a rainbow, the game logo and more than a couple of playing cards with dated looks.

Compared to other Novomatic slots that I’ve tried in the past, I found Rainbow Reels to be more generous with its features. There are more of them, including bonus games with big potential rewards, so that’s one of the major pros the game has in this area. 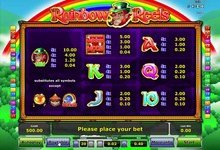 For starters though, before we get to the bonus games, let’s check out the slot’s wild feature. Easy to spot, the symbol has a Wild logo at the bottom of its image, which otherwise is showing us the typical red-headed leprechaun that’s sporting a green hat and smoking from a pipe. Wilds are expected to behave as replacement symbols, though they will do this only when appearing alongside enough regular symbols that they can form a combo together. They can’t help with the scatter symbols, those are on their own as they try to trigger features for you.

Getting back to the wild feature, the Leprechaun will be responsible for one of the highest paying combinations being formed, since it uses its own symbols to do it. It doesn’t pay all that much, just 500x the line bet for each combo, but with 20 lines it could add up if you get enough of them on all the reels.

Three bonus games are available in Rainbow Reels slot, each with its own scatters symbol that can trigger it. None of these scatters will have their own reward to give.

Over The Rainbow will be activated via Bonus Rainbow scatters, once they appear at least three times. You have to pick from the four-leaf clovers, to reveal the prizes you won. Once you hit “Collect” or you get to 500x the total bet, the feature ends. 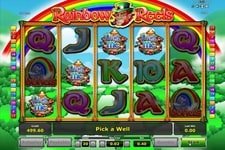 Pot of Wealth is activated via scattered Pot of Gold symbols if they appear on the three middle columns in a single round. You pick one of the pots and a prize will be revealed, at random. Its highest payout is 500x the bet.

Wishing Well has its own scatter symbol to represent it, and it’s going to be needed in 3 to 5 locations in that round. Once again, you just make a pick from the wishing wells that are shown, to get a reward that could go as high as 500x total bet.

In most slots, there are two components to each bet you place. On one side, you have the line bet, which determines how much you can win from individual combinations formed on paylines. On the other, you have the number of lines that are active, which goes from 1 to 20 here. Combined with a line bet of $0.02 to $5, it gives this slot a betting range of $0.02 to $100.

The least impressive thing about this game’s rewards is going to be its theoretical RTP, which Novomatic calculated at 95%. It’s on the low side for a modern slot, though someone that comes from playing such games at land-based casinos will find the odds to be a lot better online when playing Rainbow Reels slot.