Review of Rockabilly Wolves by Microgaming

The result of a collaboration between Just For The Win and Microgaming, with the latter being the one using this slot machine exclusively at the online casinos they power, Rockabilly Wolves slot was released in 2019. This is a slot machine which is dedicated to Rockabilly music, and which uses wolves as main characters, turning them into musicians and showing them off in a very well done cartoon-style. Add the appropriate music that’s used for its soundtrack, and you end up with a game that the genre’s fans will likely enjoy playing. The game area uses 5×3 reels and has 20 active lines.

Besides graphics and sounds, there is also the matter of the game’s features, and those will offer us: 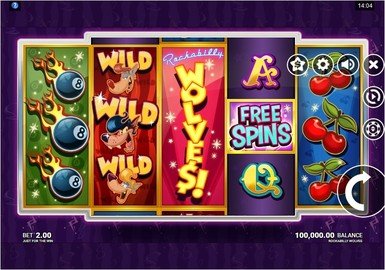 The game is dedicated to Rockabilly music, and it manages this by using a band of wolves for its main characters, the singers. You get the music as the slot’s soundtrack, a good companion for your gaming sessions if you enjoy the band’s work.

The design quality is fairly high, cartoon-style in a way that’s quite close to what you would actually see in an animation movie.

As for major symbols, those include the scatter, the wild Rockabilly Wolves band, along with the game logo, 8-ball, cherries and a bunch of uninspired Royals.

The mix of features that Rockabilly Wolves slot has seen implemented is among the things I liked most about it. While you don’t get anything that would be considered new, the developer made sure to construct the features in a way that makes the game different from others that use the same options. 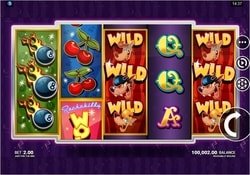 3-symbol high stacked wilds are among the feature symbols which will make an appearance in the game and will help you out along the way. Landing on the reels and occupying 1 to 3 positions on them, it can participate in all 20 lines, helping out as a substitute wherever regular symbols need its help. It will not help out a scatter. Payout wise, the wild symbol can offer you as much as the jackpot symbol, so up to 20x the stake per line covered with wilds.

The group of Rockabilly Wolves slot is going to be the image of the wild, with all three visible along with the feature logo. 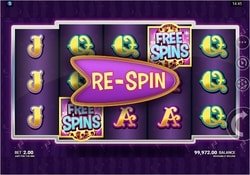 You get a scatter symbol in the game as well, and you may use it for the free spins feature, but just in case you don’t get the required numbers for that one, you can trigger a re-spin instead. The Re-spin feature requires just two scatters in view, and in exchange it holds them, re-spinning the other reels and maybe getting you the third symbol required for the main feature. 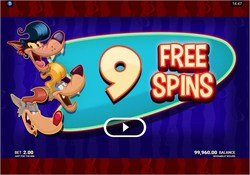 If you end up with three scatters or more, either directly or with help from the Re-Spin feature, you will trigger 9 free spins. This feature can re-trigger, with help from wilds landing on reels, as they add 3 more rounds then.

The main feature for the free spins will come in the form of Multiplier Sticky Wilds. You start with a single one, which appears on reel 3, where it covers all positions, applying a 2x multiplier to all wins. Additional multiplier sticky wilds can show up, and the same goes for regular sticky wilds, on the other reels. If the former appears, then you get a 1x boost to the total multiplier, and at maximum, it can reach 6x.

You will find it easy enough to start playing Rockabilly Wolves slot; the game is not terribly expensive to start spinning its reels. The minimum required wager is at only $0.10, while the maximum one will reach $50. Either way, you are playing with all 20 lines active, that part doesn’t change.

Now, moving on to the game’s jackpots, we find that a 2,400x top payout is possible, which would typically be a good reward in most slots, but I’d say it’s only average for one with high volatility, such as this one. Turn it into cash, and a payout of $120,000 becomes a possibility, provided that the wilds end up covering all positions on the reels.

Rockabilly Wolves slot has the Return to Player at 96.03%, enough to make it an OK choice, but it’s not something that will make you play it on its own, there are too many games right now doing the same thing.

Verdict: Rockabilly Wolves is a decent new online slot game for Microgaming’s collection, and I especially liked the way the features were constructed, as well as the quality of the design. I didn’t appreciate as much the 2,400x top payout which goes with its High volatility; I felt that the game could’ve used a better jackpot. Either way, not a bad game overall, though this one goes into the category of slots recommended for fans of the music genre, it’s not something everyone will like.