Ruby Casino Queen is one of the many slot machines which are joining Microgaming’s collection, as exclusive titles coming from independent studios, in this case from Just For The Win (JFTW). The game is very similar to Rockabilly Wolves, another recent release of theirs, so much so that it looks like a clone of that slot, with graphics the only ones changing. They chose a casino related mix of symbols, they added the Casino Queen in the form of a beautiful young woman that’s wearing a crown and throwing around casino chips, and that’s about it for the story that’s being told. Layout wise, they went with the same 5×3 reels, which have 20 paylines active.

Moving on to the list of features, the major options listed in the game include: 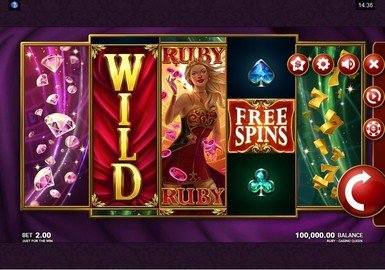 Ruby Casino Queen’s design will follow a young woman’s experience at the casino, so successful that she’s like a queen there. Shown in a stacked symbol, where she’s wearing a crown and throwing around casino chips, this is about the only one that’s not a classic on those reels.

Additional important symbols come in the form of a stacked Wild logo and a Free Spins logo (scatter). As regular symbols, you get things like 7s and Diamonds in higher pay positions, while card suits show up in the lower ones.

I’ve mentioned it before, but I will say it again, it’s the features that make this game interesting for me. The whole casino-related design doesn’t bring us anything new, but the features are going to make the action interesting, and the payouts good.

Among the features which were introduced in Ruby Casino Queen slot, the stacked Wild logo is one of the major ones. You are able to form a lot of winning combinations, in a slot where wilds can end up covering full reels whenever they land. This allows them to contribute to up to 20 paylines and wins in a single round, and things get only better once you reach the free spins.

Should wilds end up forming combinations among themselves, they pay as much as the jackpot symbol, so 20x the stake per line.

With scatter symbols (Free Spins logo) landing only twice on the reels, you might not get direct access to the free games, but there is at least a second chance style re-spin that might still take you there. When this happens, the game locks the reels with the two scatters and re-spins the others once. If you get additional scatters, then the free spins can start.

The requirement for the game’s 9 free spins to trigger, is to have three or more logos scattered on the reels. These rounds come with an initial 2x multiplier and with the 3rd reel turned into a full wild.

Regular sticky wilds can also show up, so the increase in multiplier is not guaranteed.

Anyone looking to place a bet in Ruby Casino Queen slot will be able to do so while spending only $0.10 per spin. There are options of higher value as well though, for those players that can afford to go after a bigger payout, and at its highest the wager can be worth up to $50.

Same as in Rockabilly Wolves, of which this game is a clone, we have a top prize of 2,400x the stake, which can be turned into up to $120,000 cash for a single spin. If we look at the top payout possible for the entire free spins feature, we find that it goes much higher, to 6411x the stake. To get to that kind of top payout, you need a screen filled with wilds, as this boosts the multiplier of the free spins by up to 6x. Otherwise, individual paylines pay at most 20x the stake in the base game.

They designed a game with higher volatility in this case, which means that while it’s got some decent top payouts that it could deliver at times, it’s also going to be quite risky most of the times.

Ultimately, as the game has its Return to Player calculated at 96.03%, we expect that over its entire life it will be as fair as any other slot machine, no more and no less.

Verdict: Ruby Casino Queen Slot does have modern graphics, in terms of quality of design at least, but the theme/story is about as common as it gets in this industry. I appreciated more the presence of interesting features, with 6x multipliers and sticky wild reels doing a lot to turn the free spins into something exciting. Overall, it’s an OK game for a high volatility release, though I’ve seen plenty do even better when it comes to payouts possible in a single spin.