Sam on the Beach Slot by ELK Studios

Following in the footsteps of Electric Sam, one of the earlier slot machines from ELK Studios, we now have Sam on the Beach slot. The same troll main character is now being shown as he’s enjoying a vacation on a tropical beach with his ladies. You get the same fun graphics and a whole new host of features, so it’s a game to check out.

For Sam on the Beach, ELK Studios decided to rely on a 5×3 reels system, the kind that would deliver 243 ways to win. There are quite a few features to enjoy as you play, the main ones being: 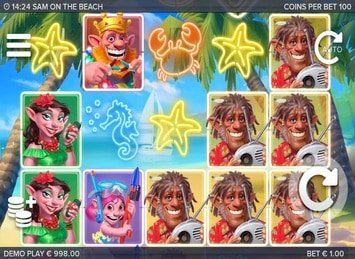 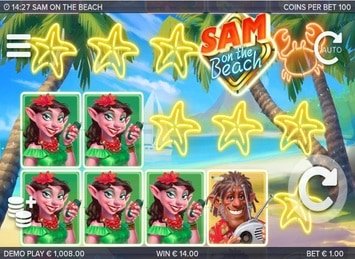 The theme that’s involved in Sam on the Beach has to do with one of the most successful early slots from ELK Studios, which was called Electric Sam. The characters of that slot machine made the move to the next game from the series, and now we have the same family of trolls sitting on a beach and enjoying their vacation. There is Sam, Sandra, Maggie and Ted in those main roles, along with logos and bells for the feature triggers, followed by neon like designs of crabs, seahorses and starfish.

Several features are available in this game, and they are mostly regular ones, though with exceptions once you manage to access the free spins.

First of all, I’d recommend you familiarize yourself with the “wild symbol”, the one sporting the logo of the game as a neon sign. You’re going to have it on the reels often enough, as a substitute that you will be able to use in combinations. Given the ways to win available on the reels, the wild’s job is made a lot easier and the feature can be highly profitable since it doesn’t take much for it to be in the right position to help. You just need it on a good reel, not on a specific position on it. It doesn’t give you a payout directly and it doesn’t replace a scatter.

A Golden Bell, a symbol that you typically find in classic slots, will be the “scatter symbol” and the trigger for 5, 10 or 15 free spins. The exact number depends on you having 3, 4 or 5 symbols of that type visible. Once you reach the free spins, you get one extra round for each scatter that appears.

The four characters are used as different types of wilds, during these free spins. Each one needs to appear at least three times, or you don’t get its special feature.

Sam will electrify a random symbol and will transform it into a sticky wild, but it needs to show up in 3+ positions first. From Sandra’s 3+ symbols, you get multipliers. Maggie will be responsible for boosting your chances to win, by firing a harpoon at landed symbols. Finally, Ted’s appearance in 3+ positions gets you a sticky multiplier.

It doesn’t matter much what kind of game you’re playing from ELK’s collection, chances are that it’s going to be a slot with the same range of $0.20 to $100. You select the amount that you prefer from a screen which has a dozen possible values for you, and then it will be used. All your bets in this game will have 100 coins in them, no matter how small or large they are. With the given betting range, the maximum coin value is $1. This is important because the paytable lists the coins that you get, not the updated cash value.

Since the game will tell you how many coins you win, and you already know that each wager has 100 coins in it, it’s easy to figure out how much you can take home by playing Sam on the Beach slot. The 500 coins coming from its best combo can mean $500 for you. The slot also mentions the maximum possible win that can be obtained inside though, and the upper limit of the payout can be 227,520 coins (up to $227,520 from a single spin).

I think that you will be satisfied with the figure of the game’s RTP, or the Return to Player. This is the theoretical amount that will go back to players, over the game’s entire lifetime. It’s a 96.3% RTP, which means that 3.7% will be the casino’s profit. It’s not ideal, but they need to make a buck as well, and the percentage of the RTP is a good one in this case.

Casinos with Sam on the Beach Slot