Santa Surprise slot by Playtech is one of the many games that have been dedicated to Christmas, and yet it has its share of pros, which should make it a favourite for many. The main thing about it would be the fact that the slot’s mix of features turns it into something interesting, while its payouts could potentially reach huge levels, of up to 30,000 coins per win line. Santa will be there, as will a number of other symbols that Christmas slots tend to have, but the graphics are dated and they’re not the main reason why you’d want to play this slot. With 5 reels spinning each round, with up to 20 lines, and with a 97.05% RTP, I found a lot to enjoy in this game.

Among the things that will get your attention, the features are among those that I liked most: 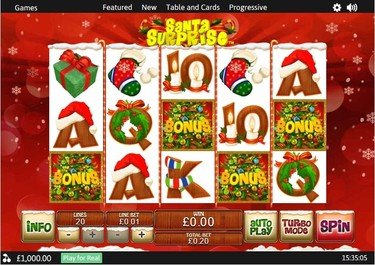 The theme of Santa Surprise slot is not going to surprise you much, and neither will the story that’s told or the angle they’re taking. It’s the classic story, involving Santa Claus and his delivery of gifts once Christmas Eve comes along. The game relies on this traditional angle and covers it the same way as every other developer tends to do it. Furthermore, we’re seeing slightly dated-looking graphics in this one, and unfortunately, you will discover quite a few games which will do a lot better there.

Santa Surprise begins its list of symbols with Santa, obviously, and then moves on to snow-covered houses, Christmas trees, bells, stockings, gifts, as well as five Royals of lower value and with various holiday-related decorations on them.

I’ve found a good mix of features in Santa Surprise, which should prove interesting for any player, since it keeps the action fresh and varied. You will discover wild symbols, several scatters, bonus games and free spins with multipliers, but you can learn more about each one below. 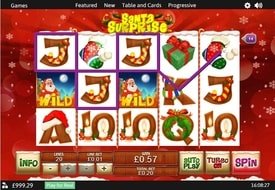 First of all, you’re going to be glad to find Santa Claus on the reels, the game’s best-paying symbol and also the one that will have a hand in quite a few combinations which can form. Whatever the value of the symbol, Santa can act as a wild and take part in its combo, provided that it first lands in the right position, of course. With the exception of bonus or scatter symbols, all others will use wilds to help them out.

That same wild Santa, when appearing 2 to 5 times adjacent on a reel, and left to right, will form a winning combo directly. The wild’s own payouts are the best that the slot can pay, and it’s going to offer as much as 10,000 coins per 5-symbol combo. 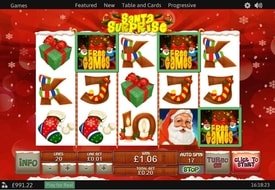 I’ve also found the free spins to be incredible and to have the best potential of the game. You trigger these when you get at least three scatter symbols on the reels, though rewards will be paid even in exchange for only two such symbols. Besides the scatter’s payouts, of 2x to 500x the stake, there are also 10 free spins which are triggered thanks to it.

While you go through the free spins, you will find that all wins formed there are multiplied by 3x. This means that you get paid very well, as this should have the potential of taking the wild’s prizes up to 30,000x. 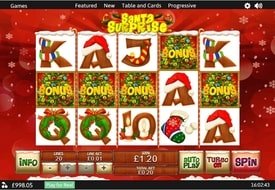 Finally, there is a bonus game to be had as well, and it triggers via Christmas Tree bonus symbols. Land 3 or more of these and the game triggers this extra feature for you. It’s not that elaborate of a bonus game, but it will get you paid, and that’s all that matters.

As a fan of Christmas, you can play this game for cheap, and not lose everything in one go. Bets as small as $0.01 are allowed each round, and they cover anywhere from 1 to 20 lines. For spins where you cover all lines, you spend anywhere between $0.20 and $1,000, though the casino decides the range ultimately.

The game does particularly well where its payouts are concerned, being capable of giving the player up to 10,000x the stake. With 10,000 coins paid for the slot’s best combinations, it’s not much of a surprise that Santa Surprise tends to have higher volatility at times.

On the other hand, it is a bit of a surprise the fact that the RTP for this slot is announced at 97.05%. This is a level that I consider to be quite a bit above average, and there are way too few slot machines that surpass it these days.

Verdict: There are some very good things to note about this game, but there are some minor downsides as well. In the former category, I’d mention some of its features, the top payouts, and the 97.05% RTP, which I love. The latter would be just the below-average quality of the design, mostly because it’s a bit on the dated side by now. Overall though, there are plenty of good reasons to check out Santa Surprise slot, and not much that should keep you away.