Review of Sherlock Slot of London by Rabcat

In typical Rabcat fashion, we find in Sherlock of London a very well-designed video slot, one which makes use of cartoon-style graphics. We’re going back to the 19th century, to Victorian London, and we learn about the mystery that Sherlock Holmes is investigating. He gets help from his friend, Dr Watson, and there will be several others that get involved as well. The slot has been designed as a 5-reel title, which allows for up to 25 lines to form combinations.

Looking for features, first and foremost? The Sherlock of London slot game gets a good mix of those, including: 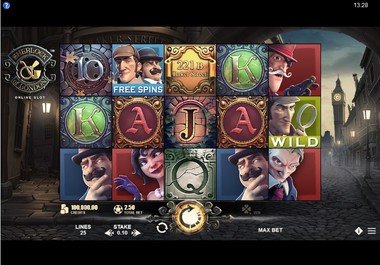 Since it’s a Sherlock Holmes themed game, we find the famous detective and his companion (Dr. Watson) on the reels of the slot. They’re investigating a mystery, and there are three different villains that will appear inside. With a Victorian era-inspired design, the graphics look gorgeous, exactly what I expect to find in a game available in Rabcat’s collection.

Now, moving on to the symbols which are shown on the reels, they include Sherlock Holmes, Dr. Watson, a 221B Baker Street Sign, the three villains of the story, along with five different Royals. Speaking of those Royals, while in a lot of games they end up taking down the game’s attractiveness, here they actually contribute to the design, they’re that good.

There is quite the list of special features in Sherlock of London slot, and in fact it’s one of the best things about this slot machine. These are not the regular features that you might be expecting, even the simpler ones appear to be modified, and they help make the slot fun.

Sherlock Holmes himself will be one of the symbols that you get to use, as a replacement in whatever winning combination can form on its active lines. Wild symbols are among those capable of paying the bigger payouts as well, though for that to happen you need up to five Sherlock icons together on a line.

Whenever there are 2 or more Sherlock Wilds in view, the game connects them all, by transforming the regular symbols between them into extra wilds. You could end up with a lot of very profitable wild symbols on the reels.

For Double Win, you need to only get two Sherlock Wilds, and for them to be on adjacent positions, so next to each other horizontally. When this happens, the wilds merge and activate a Double Win. All winning combinations for that round are doubled. This is the feature that should be able to get you the biggest rewards of the slot, at least in theory.

The Sherlock Wild can do one more thing for you, and it will happen if you get a spin where this feature is only present on either the 1st or the 2nd reel. With this one wild, which becomes locked, the game triggers bonus spins that has the other positions spin for free. Getting an additional wild will result in one of the other features triggering and the bonus spins ending.

The symbol where you see both Sherlock Holmes and Dr Watson together will act as the scatter. You need three or more symbols appearing in view, and in exchange, you can win 10 free spins. You get most of the base game features, with the exception of the Bonus Spins, which are turned into Expanding Wilds.

This feature has its own extra wilds, Dr Watson is the one acting as an additional substitute during free spins. This extra wild will not trigger any of the wild-based features, but it can contribute to winning combinations.

Expanding Wilds trigger only in the free spins mode, whenever a single wild is present on one of the reels. The reel on which it appears is then turned into a full wild column.

When looking to get those spins going, there is only one thing that the game asks of you, and that’s to decide on the stake per line. You can take it from a minimum of $0.01, to the maximum stake of $2. Since there are 25 fixed lines, you multiply the stake you just picked by that amount, and you get total bets between $0.25 and $50.

Up to 1,000x can be paid by the game, taking into account all lines and the possibility to have top paying combinations on all of them. That’s a jackpot of up to $50,000, with each line paying $2,000 at most. There is one way, that the game appears to make possible an even better reward, of up to 2,000x ($100,000), and that’s through a Double Win event (all wins of the round get doubled in value).

We found here a game with Medium volatility, which isn’t terribly risky to play, but at the same time it will not return a huge top jackpot to its players, not even its luckiest ones. RTP wise, it’s at 96.03%, which is the minimum I’d consider acceptable for a modern title.

Verdict: The Sherlock of London slot is a fun game, which will offer a long list of features, excellent graphics and medium volatility. There aren’t a lot of bad things to note about it, just some average areas, such as the RTP of 96.03% or the payouts which seem to go up to 2,000x at most.