Superhero themed slot machines are a lot of fun if done right, and especially if it’s a branded release, and you’re already familiar with the story behind the game, and you’re a fan. Comic book themed slots are more expensive to make as well though, and they end up paying less to the player, so it’s interesting to see games which feature made up main characters. Betsoft tries it with Spinfinity Man slot, where they have designed their very own gambling themed superhero. With 3D graphics of excellent quality, this game relies on a special layout as well, with 7×7 reels hosting a Cluster Pays system, which can pay as much as 5,600x the stake.

Features are going to provide most games with the spice they need to be interesting long-term, and Spinfinity Man has its own list of options to offer players: 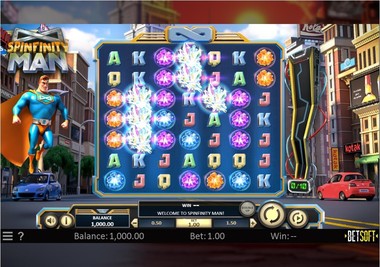 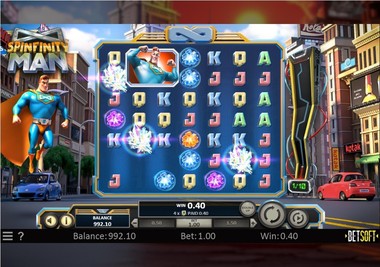 The majority of the slot machines using superhero themes are branded titles, relying on inspiration from the likes of DC Comics or Marvel, but in Spinfinity Man we’re seeing Betsoft making up their own universe. They’ve done a very good job designing the slot machine, and the two characters, Spinfinity Man and Mr X.

As for the symbols shown, there are the two I just mentioned, along with four types of crystals, four Royals and an Infinity Bubble Wild.

Betsoft has gone all out on the features section of Spinfinity Man. They’ve included a lot of different options, which helps the game feel fresh in the long run. There is a lot to do, explore and trigger here, and there is always something happening, which is a plus for a high volatility slot, which tends to become boring since you don’t win that often.

First, a word about the Cluster Pays system, though. It’s fairly common these days, and it works the same way here, as in other slots. You will need 4 or more matching symbols to be next to each other, in order for a winning cluster to form. The symbols can touch horizontally or vertically, but if they’re in a diagonal, then they are not considered to be neighbours. The top-paying clusters will have 45 or more matching symbols (out of 49 possible).

During bonus features, Super Powers and Super Combos, rewards are calculated based on the number of symbols involved, for which you get prizes between 0.1x and 0.6x the stake per symbol.

As is often the case in such games, the action is complete with an Exploding mechanic, where winning symbols get removed, only to be replaced with others. This can result in new waves of wins.

Super Wilds: The Super Wild is one of the easier features to figure out since it’s not that different from what you get in other slots, even though it helps form clusters here. You need these special Wild symbols to appear next to regular symbols, in order to contribute to their clusters, if one can be formed with 4+ symbols. They will not replace a Mr X or Spinfinity Man icon. These wilds are even capable of contributing to multiple clusters at the same time.

Super Power Combos: To trigger one of the 5 superpowers of Spinfinity Man, you will need its symbol to make an appearance on the reels. His superpowers include:

Fan Girl Fame: You have a big fan in the game, a girl that gets more excited with each new explosion of winning clusters. Get at least five of those winning clusters in a single spin, and the fan’s feature will activate. It will give you instant wins when this happens, by making a random number of symbols to explode.

Catch Mr X via the Villain Trail: The Villain Trail is one that you can get on, and advance, as you get Mr X symbols to appear in the game. Once the trail advances, the Mr X symbol goes away, and others will come in to take its place. If you complete the trail and you catch up to Mr X, then the free spins are triggered.

One thing to keep in mind here is that the trail is different for each bet level, so if you change the wager, you’re starting from scratch with the other value.

Mr X Free Spins: The final target appears to be to trigger the Mr. X Free Spins, which is done via the Villain Trail, as mentioned above. It’s going to have 10 free spins to give you, where Spinfinity Man is turned into Mr. X, with combos of his own to apply to the game area. Each time that you get a new Mr. X icon on the reels, there will be 1 extra free spin added to the total.

As for the powers of Mr. X that will apply along the way, you will find that they’re pretty much the same ones that you got in the base game, they’ve just been adapted to the villain side:

The betting options are at the bottom, and they have a range that starts from $0.10 and ends up at a maximum of $10. All potential clusters are covered here, though the game seems to simulate the use of 10 lines/coins.

As for the rewards that are possible inside, this game will pay up to 5,600x the stake, which is not bad for a High volatility title, though it means at most $56,000 cash for the player with the maximum bet.

Verdict: I enjoyed a lot of things about Spinfinity Man, and if you’re into superhero themed slots, I think you will find plenty of good reasons to check it out. The RTP is at the right level, the payouts are decent for its volatility, and there is a long list of features to explore along the way. It’s not a game for everyone, it’s fairly risky and not appropriate for casual players, but overall I think it can be a good fit for experienced gamblers.