Released in 2013 by NetEnt, Starburst has quickly become one of the most popular and most played slot machines in online casinos. This was mostly as a result of the game becoming the favourite slot machine to offer free spins on for most casinos that have NetEnt content, but that doesn’t take away too much from the game’s own merits. It’s the game that every player seems to try at one moment or another, and we will take a look at everything it has to offer in our review.

The Starburst slot game does not offer that many opportunities to form new winning combinations, having only 10 active lines that are fixed on 5×3 reels. Feature-wise, it’s not a very complex mix of options either, but you do get the following: 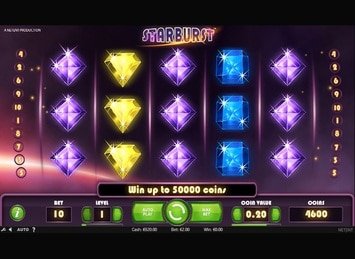 Starburst slot will give you the idea that it’s inspired by the stars, and it will be, but only up to a point. It’s what you’re seeing in the background image and in the wild symbol, but that’s it. The regular symbols are classics or gems, and while of good quality, they’re not particularly interesting.

The Star symbol doesn’t show you an actual star, just an approximation of one, with each of its arms being of a different colour. Moving on to the regulars, those symbols have a Bar logo and a red 7 as the highest-paying symbols, and then we get to the gemstones. These have different colours and shapes, representing sapphires, emeralds and other types of gems.

Overall, the graphics of Starburst look fairly simple, so there isn’t too much complexity to the game, but that’s probably one reason why it has so much attention, as everyone can play it.

If you want to place a bet in Starburst, all you will have to do is select a wager for the 10 active lines. The lines being fixed, you’re not able to change anything about them. The options that are under your control will have you change the bet level from 1 to 10, and then the coin value from $0.01 to $1. Mixing those two options together, you can spend as little as $0.01 per line ($0.10 minimum bet), or as much as $10 ($100 total bet).

Winning in Starburst slot will give you a reward of up to 250x, which in this case could mean $2,500 cash. That’s for one combo, but since there are 10 available, you could get $25,000 from a single round of Starburst. Long-term, the game doesn’t pay too badly, offering on average $96.10% back to the players, for every $100 that is spent.

Starburst is not a complex slot game, but it can be rewarding and it will offer at least one big feature that will have a big impact on the game when it triggers properly.

Before we look at the main feature, it’s worth noting that the game will pay both ways, so whether your three or more matching symbols are aligned from the left or the right, you can still get a win. That’s something that you don’t see in many other slot machines, which usually use the left to the right system only.

It’s also the type of game to rely on stacked symbols, which has a big influence on the number of winning combinations that you can get. You don’t win too often with them since reels don’t have too much diversity of symbols on them, but when you do have the required symbols in place you will usually get them on multiple active lines at a time. An upside would also be that the slot uses only 7 regular symbols, while other slot machines have 10 or more. This makes it more likely for a combination to be able to form since the reel positions aren’t as split between more symbols.

Now, to get to the main feature offered in this game, let’s check out the Starburst Wilds. This is basically an expanding wild symbol, which the game will only place on the reels 2, 3 and 4. When it lands there, it expands and covers the reel automatically, even if this doesn’t result in an immediate winning combination. That’s one major difference from other expanding wilds, which usually will take over reels only if you have a win that way.

Once the wild has expanded on its reel, it will give you a re-spin. At most, you can have 3 re-spins in a row, with these expanded wilds being sticky. To get the additional re-spins, you need new wilds to appear on the other reels from the middle, or for them to be there from the start.