The story is an interesting one, quite unique, but the layout that’s involved is not, featuring standard 5×3 reels which have 20 fixed win lines. As for the features, the complete list has for you: 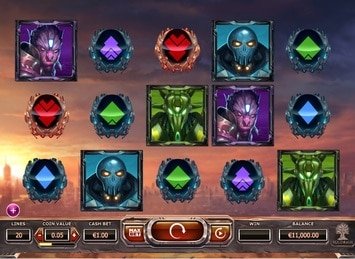 The story that Yggdrasil tells in Super Heroes slot revolves around an alien invasion of our planet and the superheroes that fight against them. The graphics are excellent, with superheroes appearing as random features which attack the reels and with the four alien monsters being the high-paying symbols. Lower paying symbols have futuristic logos. Beyond the reels, you see a post-apocalyptic image, the result of the alien attack on a human city.

Once again, we’re looking at a great design from Yggdrasil Gaming, a developer that has proven time and time again that they don’t mess around when it comes to graphics.

You can expect a standard betting system from this game, one that involves 20 lines and asks you to use bets as small as $0.20 or as big as $100 to activate them and spin the reels. You have line bets of up to $5 that you can use if you can afford them.

If you check out the regular wins only, then at most you can expect a payout of $2,500, while certain multipliers can improve them further, even up to $25,000. The game can pay at most $320,000 in a single round, obviously from multiple combinations.

When it comes to features, Super Heroes slot really shines there. The game will often rely on random features, but there are a couple that triggers through regular symbols as well.

First, there will be a Wild symbol in the game, a futuristic one that appears inspired by the alien overlords. Use this one just as a substitute, nothing else, and only if we’re talking about a regular symbol.

Second, you can get a free spins mode to trigger, the scatter symbols that do this showing the Free Spin logo. 4 to 7 free spins are activated, with a Superhero feature active during each round. They’re at level 1 initially, and they level up with each new appearance.

Super Hero is the name of a random feature that activates and brings two random heroes to the side of the reels. They perform their feature at that point, and they have a level that is shown in an icon shown above them. The level is randomly assigned during the base game.

As for the superheroes that trigger those random features, the list starts with Mirage, which delivers a mystery win that goes up to 1,000 coins. Next, we get Raven, which depending on her level will give you 1 to 4 wild reels. Hopper adds 2 to 5 random wilds to your reels. Tesla will have a feature where 2 to 5 symbols are replaced with a single icon, guaranteeing a win. Trance has 1 to 4 extra free spins and she appears only during free spins. Knox delivers 2x to 5x win multipliers, applied to the total amount won that spin.

Super Heroes slot, with its awesome graphics, futuristic story and a long list of features, should be a must-play game for anyone.