Review of Superman: The Movie Slot

Playtech’s love for branded slot machines is well known, and among the franchises that have been covered most, we definitely need to include the Superman one. In this case, we have a 2017 slot machine with a theme that is based on the original film of the 70s, while in Man of Steel the game is based on the remake. Let’s take a look at this original theme Superman variant though, to see what it has to offer.

Those interested in playing Superman: The Movie will find that the 5×4 reels get a huge number of active lines, 100 in total, with that number of opportunities being available for every single round you trigger. There are plenty of good features as well, not just pay lines: 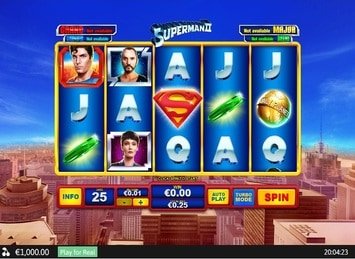 The theme that’s offered here is the original one, based on the Superman movie that was released in the 70s. Despite this choice, the graphics have been remastered and they look good enough to be from a more recent film. It’s going to have plenty of images of Superman, Lois Lane, Clark Kent, various logos to trigger the features, but also the Daily Planet globe, a Kryptonite necklace and ice-like playing cards. 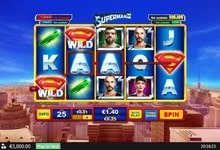 It shows that Playtech tried its best to make the game attractive, as the features are also pretty good on average, not just the basic variety.

For starters, in one of the main roles, you will find the famous Superman logo, the one which you still see on t-shirts today. That red S logo is a wild feature for this game and it serves as a hero of sorts, that comes to your aid and helps you form a new winner if it lands in the proper position. Wild symbols may not be replacements for any of the other feature triggers. 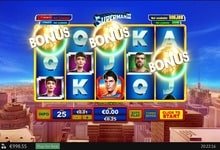 Once you get to the Free Games logo, with an integrated rocket in its design, you have a scatter symbol that’s added to the reels 1, 3 and 5. You need it on all three reels, and in exchange, you’re getting the Save The Day Free Games. You can get 10 free spins out of this with the Superman Logo Wilds locked in the positions they land in. After that, Superman turns back the time and you get another 10 free spins, with the set of wilds that you accumulated so far.

One should also pay attention to the Crystal Bonus, which is a feature that is activated when the player lands the Bonus logo on the middle three reels, simultaneously. Once you’ve reached the bonus game, you have to pick blue crystals to get cash prizes or access to other features. If you find the round arrow, you reshuffle the crystals and you start over, but you get the wins from all of them first. Multipliers of x2 and x5 are available and will boost your payouts from the feature. Finding the green crystal ends the feature. Locating the Superman Logo gives you the location of the green crystal, and you can continue the feature.

In a game from the DC Comics universe, you can expect for progressive jackpots to be available, the same ones that you can win in every other slot connected to this brand. Here, the player can gain access to one of the four mystery progressives at random. They are the Grand, Major, Minor and Mini prizes and they will come via a bonus game, at random. You can have a better chance at triggering them with a larger bet. If the Jackpot Game triggers, then you are guaranteed to win one of the four jackpots, though some have very small values. The best one, the Grand Jackpot, has the potential of making you a millionaire.

Getting back to the regular wins that are possible in this slot, the Superman symbol can deliver a 500x reward, which for this game would mean $400 cash at most.

I’m not crazy about the 95.01% RTP that has been announced for this game, it’s lower than for many other slots you see in the market now. The developer needs to pay for the license to the brand though, so the low RTP is understandable.