Following after a fairly popular Taco Brothers, Saving Christmas version is designed to fit with the holiday theme, and relying mostly on appropriate graphics while keeping the same Mexican brother’s theme as before. They have the same game area inside, with 5×3 reels able to spin, and there are 243 ways to win, which allow for winning combinations to form with ease. It has excellent graphics, one of the common pros for ELK Studios releases, but it doesn’t stop there, as you’re about to find out.

As with the original, there are several features included, and with their help, the player’s experience with the game is much improved. These will include the following: 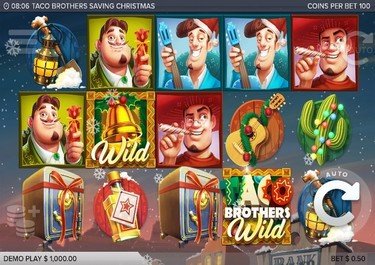 The action of Taco Brothers revolves around three brothers, musicians by the looks of it, and Mexico-based. It’s a typical party themed game in a way, particularly for that part of the world, but with much better graphics than in a lot of other slots. ELK Studios designed this game mostly as a Christmas appropriate game, being based on the original quite a bit. They changed the graphics in some of the symbols so that they brought snow to Mexico, but not much has changed otherwise.

As symbols, you will find a Taco Brothers logo as a wild, a Bell as the second substitute, Safes with ribbons on them as scatters, while the highest paying symbols give us the three brothers. Lower value positions have various objects that are Christmas decorated, ranging from guitars to cactus plants, bottles of tequila or lanterns.

First, a word about the way the game creates its winning combinations. Same as in other modern slot machines, you need 3 or more matching symbols (wilds can help), for a combo to form and for the associated prize to be paid. The difference is that in this game you just need the symbols to be on three consecutive reels, they don’t have to land in certain positions. The slot takes into account all possible combinations, and so the position on the reel is no longer relevant.

The Bell Wild symbol is going to be used as a regular replacement, which you need it to appear on the right reel, so that it can be included in any regular combo. It’s not a replacement for any of the other major feature symbols, only for the regular ones.

Have two symbols with the Taco Brothers Wild logo appear, and the game will trigger a re-spin feature, allowing you to get the third safe symbol required so that the free spins can trigger. Since it’s a wild, this symbol is also part of any regular combinations you might be able to form.

One of the game’s more profitable features, the Wild Escape rounds are free spins, which you get whenever three Safe symbols appear scattered on the reels. A multiplier results from the explosion of the safe, and you will get a 1x to 3x boost applied to wins, as a result.

Whenever the three Taco Brothers individual symbols appear on reel 5, they are turned into Running Wilds for this feature. They start moving towards the left side of the game area, one position at a time until they are removed. Once they’ve all left the game area, the feature ends.

Cpt Diaz is an additional symbol, which comes and imprisons one of the brothers. Should all brothers be imprisoned, the feature will then end.

Senorita is another one, a symbol which can restart the brothers and their position, which in turn adds more free spins to the total. Imprisoned brothers can also be released, with Senorita’s help.

The bets can be modified through an options menu, opened when you click on the Stacked Coins button, the one in the bottom left corner. The options listed range from $0.10 to $50, with a total of 12 different bet levels available. What’s not immediately made apparent, is that you always have 100 coins in the wager, even if you go with the smallest bet.

The slot’s jackpots are mentioned in coins, which is not obvious immediately. You do get ways to win, as well as multipliers, so even though the individual combinations pay up to 400 coins, there is some serious potential in this slot. In fact, ELK Studios mentions that the top jackpot available here will give you 150,000 coins. Since you always use 100 coins, this means that 1,500x the round’s stake is the highest payout that you can get inside.

We’ve been told what the RTP is like as well, and at the 96.40% that ELK announced, I for one am satisfied with the game’s return.

Verdict: It’s not a completely new game, but the Christmas style graphics work pretty well for it, and they make it an appropriate choice for players that want something which keeps them in the holiday mood, without going to a fully-fledged Santa-themed slot.