Review of Take the Bank Slot by Betsoft

When it comes to slot machines, and the themes that they have, often enough it’s a get rich scheme that is going to be chosen, and it doesn’t have to be something that people would actually get into. Bank robberies have been developer favourites over the years, along with treasure hunting and casino themed action, and Betsoft Gaming has chosen that same type of story in ‘Take the Bank Slot’. Using explosives, crowbars and the reels with its features, the player tries to hit one of the game’s bigger payouts, and take it home. He does so in a fairly big game area, with 5×4 reels which are going to have a total of 75 active lines.

Betsoft’s Take the Bank will have a couple of exciting features that you can explore: 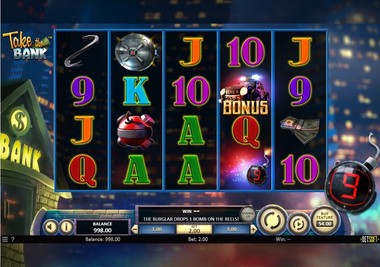 It’s a game with a bank robbery theme, nothing special about it there. Things don’t change for the better once you take a look at the slot’s graphics. Though using animated symbols in the higher value positions, Take the Bank will also include a lot of very basic Royals, and the overall effect is a bit ruined for me. The Royals from 9 to A are much more common on the reels than the ones with the Robbers, Police Cars, Diamonds, Gold Bars, Cash, Vault Doors, Bombs and Crowbars.

Take the Bank might not be the type of game to offer big rewards, and the graphics may not be the best around, but there are some things about it that will make it an appealing option. I’m talking about the game’s interesting features, which help get the player inside and then will keep him around for a while. As you will see below, the mix of the Countdown Timer with the rest of the features is one that you will not easily find somewhere else, and that’s enough to make someone pay attention.

Master Bomb Counter: The game revolves around groups of 10 spins. There is a counter which ticks down, and once 10 rounds are over, all Bombs from the reels will explode and turn into wilds, hopefully bringing around a big payout.

The counter is available for the current bet level, so if you change the amount wagered, it will reset.

Bomb Wilds: The Bombs get placed on the reels by the Robber symbols when they make an appearance. The Bomb becomes an overlay symbol, shown in the corner of the position it lands in, with a small counter that matches the main one. It will stay there without doing anything, but it’s not in the way, and the symbol positions to which it is attached can still form regular combinations. I like that Bombers are stacked symbols, which means that often enough you get multiple Bombs to appear on a single reel.

Once every 10 spins, any Bomb overlays that are available will explode and will be turned into actual symbols, which will be used as substitutes for that one round.

The wild symbols that you get this way will act as replacements for most symbols, provided that they’re forming their own wins, and they don’t act as triggers for features.

I quite like the fact that this feature is different, and the possibility of accumulating a lot of wilds for use in a single round is also good. The only issue I have with it is that you only get the use of those wilds for 10% of your spins, but as I said, the fact that you collect them all from the previous 9 spins will make up for that.

Free Spins: Police Car scatters can appear in the game, on the middle reels. Only when they all show up at the same time, do you get access to 15 free spins. The Master Countdown is paused at this point.

During free spins, the game adds 5 to 10 Epic Wilds on the reels, which will constantly move around the reels. With 20 symbols in the total present, this would mean that anywhere from 25% to 50% of all positions are covered by wilds, which is great.

You will find all the betting options at the bottom, with a list of values shown there, for you to click on. As I mentioned above, changing the bet level will reset the Bomb Countdown, so make sure that you choose a value that you can sustain for at least 10 spins. The bets possible are between $0.20 and $20.

Where I found Take the Bank to be slightly disappointing, is when it delivers its top payouts. With a maximum return of 359.7x the stake, and a payout of up to $7,194 in a single spin, the game clearly doesn’t do enough to go after the more experienced players.

The game’s coming with Medium volatility, and a hit rate of 20.12% in the base game, so there isn’t much that I would call exciting there. However, get into the free spins mode, and thanks to those Epic Wilds, the hit rate gets to an average of 91.93%, and that’s where the game becomes exciting, even with a low top jackpot possible.

With a Return to Player of 96.08%, you might not be happy with the game’s combination of jackpot value/volatility, but I don’t think you will have an issue with how fair it is overall.

Verdict: Take the Bank is a game that tries to do things differently, and in a market which has thousands of slot machines for you to choose from, that’s something to be appreciated. They do change things up, and they can make the base game feel different, while the free spins are truly exciting, since the hit rate is at an average of 91.93% there.

That doesn’t mean that the game is perfect though. It’s got very small top jackpots for one, and even though it has medium volatility, it pays like a low volatility title. It’s true, that once you get into the free spins (1 in 129 chance), things will change for the better, but those features are not that common. Experienced players will likely stay away from it because of its very low top payouts, while casual players will probably much more inclined to try it out. The promise of a decent payout every 10 spins is going to keep them around.

What’s the top jackpot of Take the Bank Slot?

What are some of the special features available in Take the Bank?

Take the Bank has a couple of very interesting options, such as the Master Countdown timer, the possibility to collect Bomb wilds and use them all at the same time, or free spins which have 5 to 10 Epic Wilds constantly moving around on the reels.

How often does Take the Bank form winning combinations?

What’s the volatility and RTP like in Take the Bank?

Take the Bank uses a combination of Medium volatility, with a 96.08% RTP, which means that a lot of players will enjoy using it.