For Temple Cats slot, they used a system that placed 10 active lines on 5×3 reels. Endorphina chose a couple of features that you can get access to and which make the action interesting, including here: 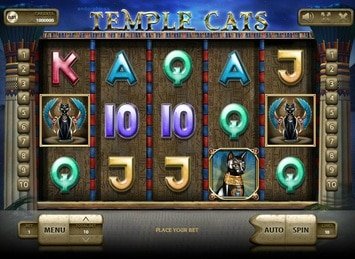 The cats of Ancient Egypt are the big focus of this Endorphina slot machine, and it shows in the choice of symbols and the rest of the graphics that were used. Bastet, the deity with the body of a human and the head of a cat, is the one that inspired this slot machine. It’s the only one to have such a focus on the cat-headed god, and that alone makes it unique, even though the Ancient Egypt category is such a heavily-populated one with slots already.

Though most of the high-paying and feature symbols you see in the game are going to be modelled after cats, the one that delivers the top jackpot shows us a woman in an Egyptian outfit that’s on the skimpy side, and she appears to have the ears of a cat on her head. The feature symbol has Bastet and Anubis together but facing different sides. Three other symbols are modelled after cats, showing them in statue form or represented through a symbol that mixes the Ankh with the Eye of Ra. The final few symbols of the game are getting playing cards.

Setting up wagers in Temple Cats, as in a lot of other Endorphina slot machines, is not necessarily an intuitive process. The betting options aren’t designed in a way that would indicate that they’re clickable, so it’s a process that requires a bit of testing.

You can modify every single aspect of the wager, from the lines (1 to 10), number of coins (1 to 10 per line) and coin value ($0.01 to $1). In each case, you have to click repeatedly on the value you want to be changed until it reaches a level that you’re comfortable with. You can spend even as little as $0.01 and the reels will spin, but you can also increase the bet up to $100.

If you set up the bet at the highest level it can be at, then the paytable will indicate how many coins you can win. Depending on the coin value you’ve selected, your reward of 50,000 coins could bring you up to $50,000 from a single combination.

The game’s RTP has been set to 96%, an information that you will find on one of the pages of the paytable. This is a good figure, with most slot machines launched right now having that percentage or a higher one.

There aren’t that many feature symbols to be had in Temple Cats slot, but you do have one that you can use in both the role of the scatter and that of the wild. The one in question has the image of a cat and of a coyote, so both Bastet and Anubis are present in it.

The role in which you’re most likely to find this symbol is that of a wild, since even when it appears once it can be of help. You need it to appear as part of a regular combo at that point, with symbols of the same type found next to it, to create a new win together.

If you happen to get the symbol at least three times in view, then it’s used as a scatter, and besides a reward that it awards, it will also be a trigger for the free spins.

The 3+ scatters will act as a trigger for 10 free spins. A special expanding symbol will be chosen at random by the game, as the free spins start. You can’t use a wild to act as a replacement for this special symbol. Special symbols may expand to cover all the positions on a reel, but only if the rest of the symbols required for a combination are available on the other reels. If it doesn’t bring a win, then it stays in its original size. As you go through the original free spins, you have the option to retrigger them and continue playing this feature.