The Emirate Slot by Endorphina

The luxury that you’ve been hearing about in the Middle East is real, and you get a glimpse into the life of the rich from the area in The Emirate, an Endorphina slot machine. The rich and the luxury theme that you get from this beautiful design is based on the United Arab Emirates, one of the richer countries in the region, and the one where you can find the city of Dubai. It is a big part of the slot’s design in fact.

Despite the modern design, this is a game that can offer only 5 active lines for its 5 regularly-sized reels. As you play the game, you will find that there will be few features for you to enjoy and to make the action stand out a bit. The only feature symbols available will be the Scatters. 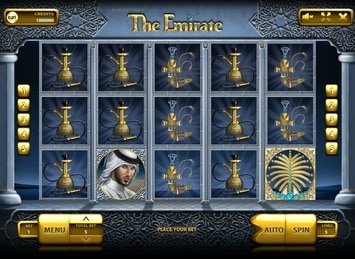 Dubai, the capital of the United Arab Emirates, is one of the world’s most stunning cities and the major focus of this slot’s theme. The game seems to be just as much about the Arab families that are living a life of luxury in that city, so you have a man and a woman in some of those symbols, an SUV racing across the desert, as well as three symbols showing different hookah pipes. The best symbols advertised in the game will be the ones showing you the man-made Palm Islands on one hand (for the scatter) and the skyline of Dubai on the other (for the top jackpot symbol).

The 5 lines available in this game might not make it feel a modern release, but it’s definitely going to fit in that category of slots. There are beautiful decorations in the area around the reels, with the game area sitting between two pillars, as you’re looking out to the desert at night. The quality of the symbols recommends this as a high-end design, modern and very attractive. You also get no unrelated symbols from it.

Only one feature has been announced for the reels of The Emirate, and it will be a scatter symbol that doesn’t get to trigger any bonus game or free spins. All it does is appear multiple times anywhere in view, to give you a cash prize that gets up to 50x total bet, so it’s not really that impressive of a payout. The symbol that gets that particular role is the one showing the Palm Islands.

That’s it for the list of features offered in The Emirate. As I said, you get no multipliers, no wilds, no free spins or bonus games. It’s a game that could be mistaken for a classic game in 5 reels form if it didn’t have the high-quality graphics that it does.

If you want to set up a bet in The Emirate, you will be doing so via three options that are spread out over the entire screen. They’re not easily grouped up, and they’re not even marked as buttons that are clickable, so they certainly aren’t making it too easy for the player to change the wager he’s using.

Look in the top left corner, to find the coin value that you’re currently using. It’s a value that can be worth anywhere between $0.01 and $1. Click repeatedly on it until you reach the denomination you want. If you clicked one too many times, you will have to keep clicking until the value cycles back and gets to that level again. You can’t reduce a bet value, only take it up, which isn’t very user-friendly.

The most luxurious city in the world, Dubai, is the one that quite appropriately is used to trigger the biggest payouts of the game. Having up to five on an active line grants you a payout of up to 5,000x, which is going to be turned into a reward of $50,000 at most.

The Return to Player that has been announced for The Emirate is 96%, a very respectable figure that should make you want to play it. The smaller number of symbols is partially to blame for it, since there are only 9 in total on the reels, while other slots might have 4-5 more. It’s going to be easier for the slot to form its winning combinations, but the downside is that it will not supplement that with features since they’re almost non-existent.