Review of The Flash Slot by Playtech

Playtech, one of the top developers of slot machines and other types of casino games for the online market, is responsible for quite a few superhero-themed games launching over the years. Thanks to the agreement that they have with DC Comics, they designed and launched games like Wonder Woman or Justice League, and now we’re looking at another one, The Flash. Using Flash and Reverse-Flash, as the hero and the villain, the game keeps the comic book style graphics that you would want out of a branded slot machine, and it looks great as a result. They designed it as a slot machine with 5×3 reels & 50 active lines, so there are a lot of chances for you to walk away with a decent payout out of it.

If the features are the ones interesting to you, then you will be glad to hear that there are several which look good, including the following: 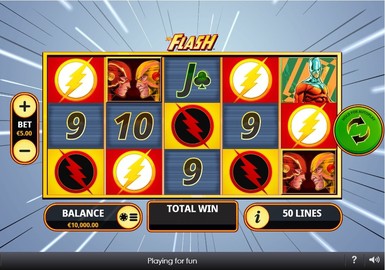 The theme is obvious in this one, as Playtech based it on The Flash, a superhero whose greatest power is his speed. The villain of this story is Reverse-Flash, and the two are its main characters and top paying symbols (along with their logos). The scatter symbol will also show them together, facing each other. Three other superheroes are present among its medium-paying icons, while low-value ones feature the Royals (J to A).

It’s an excellent design, with graphics which seem lifted straight out of the comic book, so the quality is pretty much guaranteed.

With a game that already has some history or a well-defined theme, what you want is for it to have special features that are based on the story. A good game should have more than just a background story that is represented through a few icons, it should bring it to the game area and change it accordingly. Luckily, Playtech has done just that with The Flash, and they’ve designed its main features around the epic battle between the two main characters, the hero (The Flash) and the villain (Reverse Flash).

If you look at it closely, what you get here is only a wild symbol, scatters and some free spins, which is about the same as every other slot machine around. However, the fact that they turned the free spins into the Battle Feature, makes all the difference in the world, if you’re a fan of the franchise. If you’re not, then The Flash is not going to be the most feature-rich slot around.

Random Wild Symbols: As you are going through your paid spins, the Random Wild feature may trigger at any point, while the reels are still spinning. When this happens, random wilds will be added on the reels. You can get them on the reels 2 to 5, so the 1st reel will not receive them. Subsequently, such wilds are only useful in helping you create a new combo, or improve a lower-paying one. They can’t create wins on their own since they’re only present on the last four reels.

One other limitation that the wilds have, though an expected one, is that they can’t take the place of a scatter symbol, and as such you can’t use them to get into the free spins mode. Another one is that you only get this feature during paid spins, so the free spins don’t have the benefit of their presence.

Battle Feature with Free Spins: There is one more feature symbol to look into, the scatter which shows you the two main characters facing each other. What is a bit unusual, is that rather than requiring 3+ symbols, as in other slots, you need all five reels to have the Battle symbols on them, in order to trigger the main feature. It’s making it a bit more difficult to do that, unfortunately.

At the start of the Battle Feature, you will be able to choose the one that you believe will win. The Flash is one option, while Reverse-Flash is the other.

At the top of the reels, there will be five bonus prizes displayed, paying as much as 100x the stake. One of the prizes will be randomly chosen to be active, and should the Flash icon appear on reel 2, then you win that prize of up to 100x. The same will happen if the Reverse-Flash icon shows up on reel 4.

The free spins don’t have a set number of rounds. Instead, the 5 prizes shown at the top need to go to the two heroes. The one that appeared most often, and got at least 3 of the 5 prizes, is declared a winner. If the winner is also the one that you selected as the Battle started, then the prizes which were accumulated are yours.

DC Superheroes Jackpot Bonus: As with every other game which has the DC Comics characters inside, when you play The Flash, you also get a chance to trigger a bonus feature which can result in some impressive progressive jackpots. It’s a random trigger though, so nothing you do in the game will influence your chances of getting to that stage.

If it does trigger for you, there will be a new screen with symbols that you uncover, and you try to find three matching jackpot symbols. Depending on which ones you get, there are jackpots called Grand (biggest), Major, Minor or Mini. If you do get to this stage, you are guaranteed to walk away with a prize.

In trying to cover the 50 fixed lines that are available each round, this slot allows you to pick the total bet, and it will be a big range there. The minimum wager that’s possible is $0.50, while the maximum one is $500.

As for the payouts that may come your way, The Flash symbol is the clear winner here, delivering rewards of up to 40x the stake on each line, and up to 2,000x if the reels are covered with such combinations.

An alternative, always available in DC Comics slots, is from the progressive jackpots of the series, which can have considerable value. The Grand Jackpot is the one you’re aiming for, but three smaller variants are also available.

The game’s got High volatility, along with a Return to Player of 95.14%. It’s not a great combination, and there was room for better rewards inside. Do keep in mind though, that Playtech has to pay something to DC Comics for the rights to the brand, so the costs of developing such a game are higher.

The Flash should be a very good game for the players that are already fans of the DC Comics Universe, and of this superhero in particular. Playtech has done a great job bringing the comic book character to a slot machine, and the same graphics that you’re already used to will be present inside. They’ve done a decent job with its features, and the fact that the progressive jackpot is available will also be a plus for this slot.

I’ve seen some downsides as well though. For one, the base game has only a random wild feature, along with scatters. Triggering the Battle Feature and getting something more exciting is not that easy, and once inside you have about a 50% chance of collecting the bigger prizes. With its payouts of up to 2,000x, but with High volatility and a 95.14% RTP, it’s obvious that the developer sacrificed a bit from the game’s potential.

Ultimately, I would recommend this game to someone that loves the franchise and wants the branded experience, as it’s not a bad slot machine. However, if you compare its payouts, mechanics and features to what is already available out there, it’s an average game, not a great one.