The Golden Owl Of Athena Slot by Betsoft

Athena, the goddess of wisdom, is not the main character of this slot machine, even though that’s what you’d expect. Among Ancient Greece themed slots that have appeared so far, this is the first to rely on Athena’s owl for its main character. The Golden Owl of Athena is a Betsoft game, which already gives you an idea of its graphics quality; the developer is known for its capabilities in this area.

Getting back to the way the game is played, you have 5×3 reels, the standard layout of a slot machine so far. The game area has only 10 active lines on it, fixed ones. For the big features of The Golden Owl of Athena, the list includes: 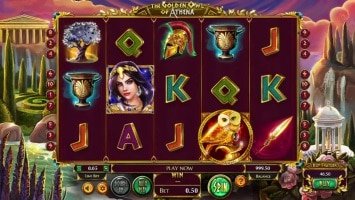 The Golden Owl of Athena is clear about the theme and main focus of its story. The little owl that is often seen next to Athena is often associated with wisdom since the goddess is the patron of this quality. You have the Golden Owl in the major feature symbol of the game, while Athena is the jackpot symbol and delivers the biggest rewards. Some of the other symbols used include Greek temples, trees, soldier’s helmets, daggers or beautifully decorated pottery. Four playing cards occupy the last four positions on the list.

The graphics are excellent, at least when you look at the background picture or the mid-high value symbols. They’re far from the cinematic style experience of Betsoft’s past releases though.

For its features, the game chooses to focus most of them into a single symbol, the one that’s showing us a Golden Owl. The symbol is scattered and wild at the same time, so it can fulfil different roles, depending on the landing positions and the number of times you get it to show up.

Have it pay you directly, and in that case, you can get a reward as high as $2,000 from it, though you do need three to five symbols of this type for a prize. Most of the time, you will get one or two Golden Owls on the reels, resulting in it acting as a substitute and assisting in the formation of a new combination. Used as a substitute, it’s just a regular wild, but it does the job it was designed to do, and it helps you make more money.

Ideally, you would want at least three scattered Golden Owls to be present in a single round since that is how to unlock the free spins. 3 Golden Owls will give you 8 free spins, 4 will trigger 12 spins, while the maximum of 5 scatters triggers 20 free spins.

Before the free spins begin, the game selects a random icon to be the Bonus Symbol. This symbol is displayed in the bottom left corner, and it will be the only one capable of expanding on the reels. It does this on the reels when there are enough of them to form combinations this way. To get a full screen filled with those symbols, you need one Bonus Symbol on each reel. With a bit of luck, it will be Athena that is chosen as the bonus symbol, not one of the playing cards, since there is a big difference in potential income.

You don’t have to spend a lot of time figuring out how the betting system works. You only have one option that you can change, and that’s the line bet. Given that you are using 10 fixed lines, the line bet always gets multiplied by 10, to reach the total amount that will be wagered that round. The line bet setting starts from the minimum value of $0.01 and goes up to $1. That gives you a total betting range of $0.10 to $10.

The Buy Feature option is displayed on the right side of the screen, and it’s going to ask you to spend 930 coins, to activate 20 free spins immediately. This is based on the current bet.

Based on the best winning combinations that can form ($5,000) and on the number of lines available in the game, you could get away with a payout of $50,000 from a single round. It’s not likely, obviously, but as you will discover next, the free spins do have a chance of turning regular symbols into expanding ones and filling up an entire screen isn’t as unlikely as you might think at first.

Unfortunately, the Return to Player (RTP) for The Golden Owl of Athena has been set to 95.05%, which means that the game will pay less than quite a few over the course of its entire lifespan slots being released these days.