The King Slot by Endorphina

The King slot is a beautifully crafted game that has been released by Endorphina, and in it, you will be taken back in time, to the Middle Ages and the court of a king that lived back then. With archery competitions, treasures and plenty of armour and weapons populating the reels, it’s going to be an exciting game to play for those that enjoy this type of content, particularly since the quality of the graphics is very high.

Though you get 5 reels of 3 symbols each, the slot will feature only 10 active lines that you can play on. They’ve gone on and added a couple of good features to it, and they will give you good reasons to try it out, particularly when you see what’s involved: 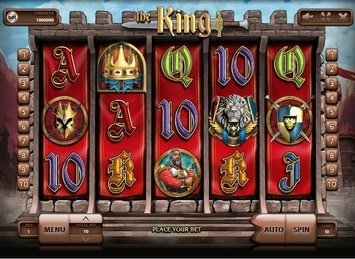 The medieval court that we see in The King is not unusual for a slot machine. The Middle Ages have often proven fun to play through in these games, but what sets this slot apart is the quality of the graphics which were used. The playing cards are there, but they don’t bother us too much.

The high quality I mentioned comes via the others, the feature and high-paying symbols. The King, the Female Archer, Treasure Chests, Shields, Helmets, a Lion’s Crest and the Crown, these sport some of the best designs I’ve seen so far in a slot with this type of theme.

Two of the most impressive symbols that you’re going to have access to in this game will feature images of a Lion Crest and of the King’s Crown. These will pay impressive amounts on their own, though they pay in different ways, they also help other combinations get up in value. 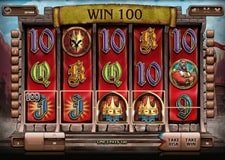 First, let’s take a look at the “King’s Crown”, which is the “wild feature” that this game offers on all reels. Get it there, in a position that puts it in a combination alongside regular symbols of the same type, and it will not only be a substitute but will also apply a 2x multiplier, effectively doubling the win of any combo it helps to form. The substitution occurs only when regular symbols benefit from it, so the scatter doesn’t get any help in triggering its features.

The best possible situation that you can be in here is to land five wild symbols on one active line, allowing them to form a combination, the best paying one of the slots. This will give you a reward of 9,000x, or up to $90,000 for the base game (triple that, for the free spins). 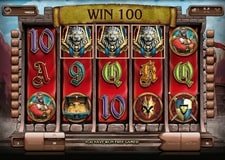 As for the second feature symbol, the “Lion Crest scatter”, this one appears at random on the reels and, as long as you have at least two visible, there will be a reward offered in exchange. The best possible outcome of their presence will be a payout of $50,000 (500x the bet), which you receive when all five scatters are in view. 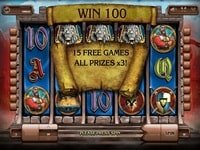 Triggering 15 free spins requires that you have 3+ Lion Crests scattered. All wins obtained inside these spins will be tripled in value, and that 3x multiplier even applies to the top jackpot. Regular combinations will benefit from both the free spins and the wild multiplier here, for a total of 6x that will be applied. The best regular combinations, which usually pay at most $7,500, can make the jump to $45,000 at this point.

Nothing has changed betting wise in The King slot, compared with most Endorphina slot machines. Their game still sports the same rather unhelpful type of betting system, which involves three options that are not clearly marked as being modifiable and which are placed in three of the four corners of the screen, so they’re not even grouped. Furthermore, you can’t take a value down, only up, until it hits a limit and it resets back to the minimum.

As for the actual betting options, those will involve the use of up to 10 pay lines, where their activation will be done with 1 to 10 coins, which will have a denomination between $0.01 and $1. You vary these options as you see fit, within the limits that Endorphina has placed on the system. As such, you can spin the 5 reels with a bet as small as $0.01, but you can also go as high as $100 in the other extreme.

The jackpot is actually impressive in this Endorphina slot, with the base game value for five Crown symbols forming a combo being up to $90,000 (9,000x), which is already very good. This goes up during the free games though, with the 3x multiplier of the feature tripling it up to a potential $270,000 payout.

The RTP that has been announced for the game is 96%, and you can find this figure in the paytable section if you want to make sure that your version is paying the same.