The Ninja Slot by Endorphina

The Ninja is one of the most impressive slot machines from 2015, and as such it has even received awards at the time of its release. This Endorphina slot machine is one of the titles that made the developer well known, and one of the reasons why they received the title of Slot Developer of the Year in 2015. The game is obviously getting a theme that’s based on the popular Japanese assassin, which we’ve seen in a huge number of movies, but in surprisingly few slot machines, the Samurai being preferred in most.

In the case of The Ninja slot, they’ve used a setup which has 5 reels with a total of 15 symbols on them (3 symbols per reel). Among the game’s features, you will discover that you have access to: 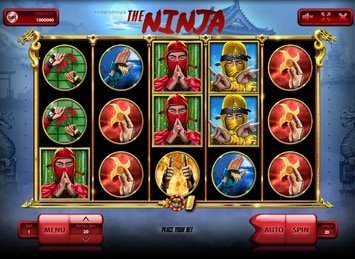 The Ninja’s theme is obvious and quite interesting to a lot of players. One of the things I loved about it is that it’s got only themed images for symbols, so there is the Black Ninja as the wild/scatter, the Blue, Red and Yellow Ninjas for high-paying symbols, and then you get Nun-Chucks, Shuriken, Claws and other Ninja specific weapons for the rest. 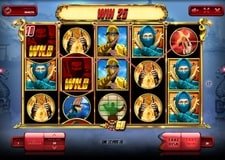 The Ninja slot is not the sort of game that will throw a lot of features at you, but it does offer at least one option that they designed to be fun to play through. It’s all based on the wild symbol, which at times will act as a scatter as well, though only when it comes to triggering the free spins.

The Black Ninja is that wild symbol, which you will be able to use as a replacement when combined with any other symbol from the game. Black Ninjas will show up at random on the reels, being used in their usual capacity when they land in the right position, alongside matching regular symbols.

Should at least two Black Ninja symbols appear on the reels, you will find that wilds start being accumulated. You get one Wild for each Black Ninja that is visible anywhere on the five reels. 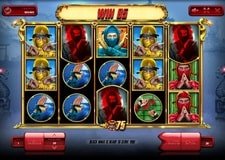 If you have at least three Black Ninja appear at random during a single round, then at the same time you accumulate Wild symbols and you trigger the free spins feature.

While in the free spins mode, you will have the Ninja place on the reels the Wilds that have been accumulated during the base game rounds. The last four reels will get wilds during each free spin. The Wild Accumulator will go down as the wilds are placed, and once you run out of these, the feature ends. At most, you can use 500 Wilds from the Accumulator. If you have more, they will be stored for the next free spins feature.

It’s time to place your bets in The Ninja slot, and you’re probably wondering what you can do to set them up. The answer can be found in three of the four corners of the screen because Endorphina has a peculiar way of doing things in this area. The top and bottom on the left side, and the bottom right corner, will be used to host options that allow you to change the coin value, the number of coins set up per line and the number of active lines.

You will be able to set up bets that have up to 20 lines covered, each one getting anywhere from 1 to 10 coins to activate it. The coin value is also under your control, and it’s selected from a range of $0.01 to $1, which you can use at will. Add up all those options, and you will get to a wager of up to $200 for each round. The reels will spin in exchange for a bet as small as $0.01 though, so you don’t have to wager big if you don’t want to.

As is often the case in Endorphina slot machines, they announced an average Return to Player of 96% for The Ninja slot.