The Vampires Slot by Endorphina

You can say a lot of things about Endorphina’s slot machines, both good and bad, but when it comes to the title they always go the simple route and choose something descriptive and unimaginative. It’s what happens in “The Vampires” as well, a slot machine that, as you might’ve guessed, is entirely themed around blood-sucking creatures. Going beyond the very simple name, I have to say that the first impression that you’re going to get from this game is great, as the slot has superb graphics.

Playing The Vampires slot will require the player to wager enough so that up to 25 lines are covered, these being available in a game area with 5 reels. Looking at the features that are involved, as you play the slot you will find a collection that has: 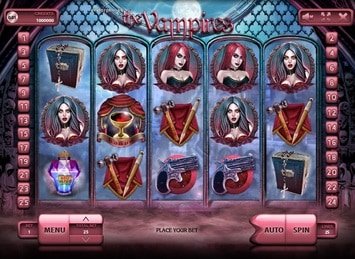 The theme is relatively simple, and it’s going to give you exactly what you expect from it, a lot of vampires. 100% themed, the game will have only relevant symbols for its reels, and it all starts with a Dracula look-a-like. Three attractive female vampires are next as regular symbols, with hair coloured in blue, red and blonde. Relevant symbols also include the Bat, the Vampire Bite, the Goblet with Blood, the Hammer and Wooden Stake, Revolver and the Vial of Holy Water.

Beyond the reels, you have a background image that seems to place the action inside a crypt, with skulls decorating the walls and fog rising from the floor. The Full Moon is visible through a window.

I loved the graphics in The Vampires slot. Everything is relevant to the theme and the quality of the symbols is excellent. 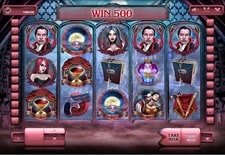 Feature-wise, I found The Vampires to be doing a lot better than many other slots that were released by Endorphina in the past. The game has wilds, free spins, a scatter and a bonus game, so there is plenty for you to explore.

There is only one symbol sporting the image of a “Bat” in this game, so the “Wild Feature” is going to be easy to spot. You have it appearing on all reels, and ideally forming combinations with other wilds since this is the way to the top jackpot. If not, you can still take advantage of the Bat Wild by using it as a replacement for a regular symbol and forming smaller wins that way. 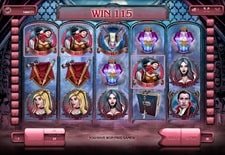 Next, we have a “Scatter”, where a vampire is shown as he’s biting the neck of a young woman. While appearing anywhere on the five reels, this symbol will start paying prizes when it’s present 2 or more times, but to get “10 free spins” from it you will need it in a minimum of 3 spots. You are getting tripled wins at this point, which applies even to the top prize.

For the final feature, we have the Necropolis bonus game, which you activate via Bonus Blood Goblet symbols, required to form a combo of 3+ on an active line.

If you’ve never played Endorphina games in the past, a short introduction to the betting system is in order. While other developers tend to group betting options and give you clear indicators/buttons that tell you to increase or decrease the figures involved, the Endorphina slots will have you clicking on displays located in three of the four corners of the game area, without telling you beforehand that they’re clickable. They almost always are with them, so keep clicking until you get to a figure you’re comfortable with.

Bets in The Vampires slot will start from a minimum value of $0.01 per line, where you have one coin of the lowest denomination, and they can go up to 10 coins of $1, so both aspects of the line bet can be changed. The number of lines is another setting that is under your control, and with 1 to 25 which can be active, you will spend up to $250 per spin.

As with a lot of other Endorphina slots, they announced a 96% Return to Player for this game, but keep in mind that it’s a figure that’s estimated for the entire life of the slot, and your experience with it may vary wildly.

The payouts that you can expect to get inside will vary with the bet that you’re using. At most, with a bet of $10 per line, the highest winning combination available will give you $75,000 (7,500x). Things change during the free spins, where the 3x multiplier can take the jackpot to a value of $225,000 per line.