The Vikings Slot by Endorphina

Whether it’s in movies, TV series, video games, books or even slot machines, the Viking warriors are incredibly popular with players. Endorphina has its own such game on offer, a slot machine called simply “The Vikings”. Sporting high-end graphics and offering several features that might interest you, it’s a slot of theirs that I think you will enjoy.

In The Vikings slot, the player has 5 reels to spin and on them, there are 20 active lines at most for each round. Moving on to the features that may trigger as you play, the list includes: 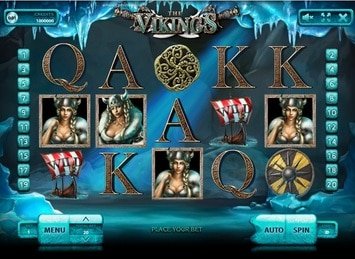 One of the most beloved themes for slot machine developers and players alike seems to be the Viking one. There is something about these fierce warriors that seem to resonate with the comparatively tame modern human, and it makes for a great story or slot machine.

In the case of this particular slot machine, we have a Viking Longboat and a Viking Skull for starters, symbols that have roles as feature triggers. The list continues with regulars, starting with the high-paying ones. There is one Male Viking Warrior that is present, a War Horse, two Viking Maidens that have horned helmets, generous cleavages and long blonde hair, a shield, a broach of some kind, and then there are several playing cards included as well.

For the most part, it’s a very enjoyable design, but obviously, it could’ve been even better if the three playing cards were replaced with something more relevant. If you’re looking for the features, I think that you will find The Viking’s offer satisfactory, though I wouldn’t say that it excels in any area. It will include a wild and a scatter symbol, each one with its own role to play.

First, let’s check out the “Wild Longboat”, one of the more interesting symbols you’re going to see in this game. It will be available for you to use in any new winning combinations, as a substitute that can take the place of another if necessary. You first need it present in a position where it can make this possible, or it’s not going to be of any use to you. Wilds are not capable of paying you directly in this case, and they don’t replace scatters either. 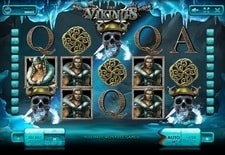 The only other feature symbol that’s implemented in The Vikings slot is the one that may appear anywhere on the reels that it is allowed on and based on the number of times you see it there will be free spins triggered. “Three Viking Skulls” will be needed on the reels, to activate the free spins feature.

This feature involves a total of “12 free spins”, rounds which will be played at the same wager as the one that was selected in the triggering paid spin. The one extra benefit of the free spins, which make them more profitable than the base game, will come in the form of a stacked wild symbol. Wilds will now cover as many as 3 symbols on the reels they land on, but it’s not a guarantee. Either way, the chances of a new combination forming should go up significantly, thanks to it.

Looking at the features that were included, I’m not as impressed with The Vikings slot as I was with some of the other slots offered by Endorphina. It’s still an OK spread of features, just not a great one.

One difference that I see with the betting system from The Vikings slot is that it has been optimized for a mobile screen, and so you will find all options grouped on a new menu. You are allowed to set up the Denomination ($0.01 to $1), the Bet (1 to 10 coins selected for each line) and the Lines (1 to 20 available).

The bets that result from the options I just mentioned will range from as little as $0.01 to $200. It’s up to you really, and the line bet that you pick will influence the rewards directly. That line bet is valued anywhere between $0.01 and $10 (if you’re using all 10 coins at maximum value).

If you look at the paytable, you will see on it the number of coins that you can get with your current bet. Select the highest bet, and you will get up to 10,000 coins from the slot’s best combo, where the cash value would be at most $10,000 (1,000x line bet). It could also be as low as $100, depending on the coin denomination you selected.