Trolls Bridge slot is the first game in a series from Yggdrasil, one for which they will soon have a new instalment. The game delivers its 5 reels & 20 paylines with interesting fantasy-style graphics, placing the action on a bridge that they seem to be protecting. Those fun characters don’t look as menacing on the reels of this game, and in fact, they could bring you wins of 10,000 coins in a best-case scenario.

If we look at the important special features which are introduced with Trolls Bridge slot, the list has: 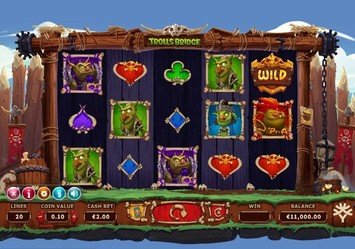 We’re being told a fantasy story with Trolls Bridge, but rather than have us looking at elves and humans, we’re being taken to the other side. The trolls might not be the good guys in any story, but they do look cute here, despite their ugliness. The cartoon-style graphics work well in their case, and the rest of the game design is just as enjoyable.

The slot’s symbols start off with the Free Spins logo, the Bonus Cauldron and Golden Wilds. You then get the four trolls, warriors all of them and dressed the part. For the final four icons, the low-value ones, you see the card suits, made out of wood and bones.

Don’t expect for any new features to be introduced, it’s mostly a mix of options that we’ve seen before, but at the same time they’re not as common as in other games. I found the action to be interesting, especially since you get complex features, not basic wilds and free spins like in most slots.

The regular wild is the one you get during paid spins, but it should be noted that there are three other versions that you can enjoy during the free spins (sticky, random or the Troll wilds).

You may gain access to the free spins feature in two different ways. One is through a Bonus Pot icon landing on the 5th reel, the other by landing 3 to 5 scatter symbols.

The feature picks which are available inside will include options such as:

Since you get multiple picks, the free spins will be played with a mix of options from the ones I mentioned (example: 2x multipliers, 3 extra free spins, 2 extra wilds and 1 sticky wild).

This is a random feature, which you can get only during paid spins. Up to 5x multipliers are applied to winning rounds if triggered. If that was a losing spin, then you can get a consolation prize of up 1,000 coins.

The betting options will be for 20 lines, and they will involve the coin value mostly. You work with it, taking it from $0.01 to $10, and automatically the total amount wagered changes between $0.20 and $200.

The game mentions that it’s capable of paying up to 10,000 coins, which means that at best it will offer $100,000 cash in a single round. It’s likely that the top payout can be reached only if the right multipliers kick in as well. In terms of RTP, the slot doesn’t do as well as other games from Yggdrasil, but it’s still within the industry average, clocking in at 96%-96.30%.

Verdict: Trolls Bridge slot has all the right arguments to make for itself, and it should be a fun game for players. It relies heavily on features for this, and it manages to keep itself interesting for more than a few spins, thanks to the way the picks can mix in free spins mode.