Twerk is a slot machine for a modern world, a game that takes something from our present and turns it into a game that people of our times can relate to, at least some of them. Twerking is a type of dance that you might’ve heard news about in recent years, as younger people adopted it and made it popular for a while. It’s been turned into a slot machine with symbols that have dancing butts as their images, with various girls in revealing outfits. Not a very clean theme then, and one that many might have a problem with, but Endorphina did it anyway, and they certainly seem to have no problem with risqué stuff.

Besides the fact that it has such a modern theme, Twerk slot will also surprise through the type of layout that it puts in front of the player. It’s a 3×3 reels slot machine, and it will have 5 fixed win lines active. The game has several features, despite the classic layout: 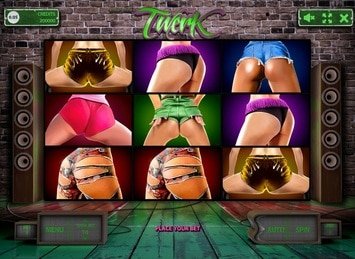 The Twerk slot will deliver the sort of theme that some will love, others will hate, so the controversy is not going to be too far away from it. Twerking is a style of dance that gained popularity in the last decade, and which sees young women shaking their booties (for a lack of a better term) to the rhythm of the music. It seems to have lost some steam, but it got its 5 minutes of fame and Endorphina chose to capitalize on that and they created this slot machine.

The symbols used here are with the shaking posteriors of several young ladies, so that’s pretty much all you see on the reels when you’re forming combinations.

Looking at the features of Twerk slot, I think that you will agree that while it’s not a lot, the list still looks better than in most slots that have this kind of simple layout.

What you have to work with is a simple scatter, a symbol that sports a “VS” logo on it, usable when appearing in any position on the screen. You need three to appear on just as many reels, occupying a third of the symbol positions used by this game. Should that happen, you will gain access to the free games feature, but there is no additional reward offered, as it would be in other slots.

The free spins in question will benefit from an extra option, called “Battle Feature”. As the free spins begin, you will find that one of the seven dancers will be selected at random. The girl will compete with one of the others, and you will receive a prize each time that she wins the battle.

There are up to six battles for her to win, and you can get just as many prizes. Should your dancer lose one of these battles, the free spins will be done. A battle will have 5 rounds and the winner needs to get the highest number of points. The dancer that has the highest number of winning combinations that round gets more points. Landing another three scatters adds an extra 3 rounds to the current battle.

It’s a very interesting feature, not completely unique, but enough so that you’re not likely to find this system in another slot anytime soon.

Any player that wants to play Twerk slot, should first familiarize himself with the betting system. At its basis, it’s going to work just like in any other slot, with coins and coin values to select, but its buttons are not very intuitive to use. It’s just important to know that some of the displays that tell you how many coins are used per line, or what the coin value is, are also buttons that can be clicked on.

You can change the coin value for one, the option for it being in the top left spot. You can have a coin value of $0.01 to $1. Next, you can modify the bet per line, and you take that one from 1 to 10 coins, as needed. The number of lines will be fixed, at 5, something that you rarely see in Endorphina slots. The minimum bet available to be selected is $0.05, while the maximum one will reach $50.

You only need three symbols to form a combination, since there are only three positions available on each line. The best possible outcome will give you 500x the line bet back, so up to $5,000 may be won on one line ($25,000 from all five).

Endorphina is letting us know in the paytable area that the RTP is set to 96%. The figure is quoted for all their games, which share the same chances of getting you paid over the machine’s entire life.