Even though most of the time we’re seeing very common themes being used in slot machines, from time to time you will find that you can get a history lesson as well from them, and in Urartu slot we see Endorphina do just that. The developer offers here a game with a theme that’s inspired by an ancient kingdom, one that existed in the area currently occupied by the country of Armenia. The kingdom of Urartu is mentioned in the Bible as well, and when it comes to unique themes there aren’t many that do as well as this slot.

Like plenty of games before it, Urartu slot is going to use just 10 active lines for 5×3 reels, even though there is space for a lot more in the game area. Several features that are interesting were selected for use in this game: 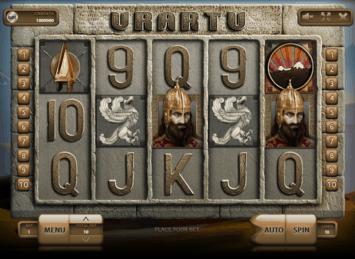 The Kingdom of Urartu is at the centre of the slot’s action, which thanks to it will have a theme that nobody else uses for such a game. The inspiration comes from a kingdom that was present in modern-day Armenia back in 860 BC, the year when it was founded. It lasted until 590 BC, so for 270 years in total. It has found its way into stories and in the Bible as well.

Thanks to the unusual theme, the graphics of Urartu slot are not quite standard ones either. You see images from the time, based on what archaeologists uncovered about the kingdom and its culture. There are images of the people, with a king and his queen visible in two major symbols, while others include soldier’s helmets or gryphon statues.

The features and gameplay that you see in Urartu are not unique just to this slot machine. I’ve seen at least two or three other games that are identical in Endorphina’s collection, with the same features and payouts, but with different themes and graphics. That doesn’t make these slots any less good, it’s just that they’re not unique. That can be a good thing, if you consider that you can have the same exciting multipliers, but in a theme that you enjoy most.

The feature that I feel is most important to the Urartu slot game is the one that can also bring the best payouts on its own. “Wild symbols”, which are showing the image of the Sun’s rays coming from behind mountains, will be forming their own winning combinations and they pay as much as 9,000x. Even if they can’t form a combo directly, they can participate in the formation of others by acting as substitutes. This way, they can apply 2x multipliers to those smaller wins.

The “scatters” are also present in the game, and they are used to not only trigger some very good prizes (up to 500x the bet), but to also activate the free spins feature.

Should the scatters land 3+ times, you will receive 15 free spins and all the wins that are triggered for the duration of this feature will benefit from a 3x multiplier. These add up with the wild’s multiplier, and so regular combinations can be worth up to 6x more than what the paytable indicates. Even once you’re inside the free spins, you can still win additional ones, if you get the 3+ scatters in view again. The bet at which the free spins are played is the one that was used in the triggering spin.

As you’re setting up your bets in Urartu slot, you will have to do it via three options that the game puts at your disposal, but I wouldn’t say that they make it easy for you. The options are spread in three of the four corners of the game area, and they’re not marked as buttons that can change, so at first you might be confused at how to do that. Just click on the display areas, to change what they’re showing you.

The bets can start from a minimum of just $0.01, which is sufficient to activate one line with the smallest bet. You can increase the denomination, up to $1, and you can also set up as many as 10 coins per line. With 10 lines active, bets can have 100 coins and a top value of $100.

The rewards that are put forward by Urartu slot will be of considerable value even if you get the combination formed during the regular spins, where it’s worth 9,000x the line bet, or up to $90,000. It makes a considerable jump during the free games, where multipliers will take it as high as $270,000. Like all Endorphina slot machines, Urartu also offers a Return to Player percentage of 96%, which makes their content adequate in the long-run.