Players worldwide have grown up playing different types of rummy, and the Vegas Three Card Rummy game available at Realtime Gaming casinos plays similarly to some of these games with a scoring system that brings a lot of strategy out of the gameplay. With correct play, you can also get a fairly high payout rate compared to other table games, making it attractive for multiple reasons. 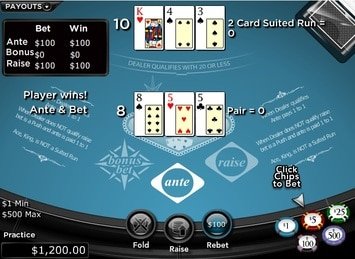 The game works as follows. You start by making a wager (the ante), and then you’re dealt three cards from a standard 52-card deck. You want to have a lower point total than the dealer, and we’ll look at how the points are determined below. Once you’re dealt cards, you have a choice between folding or raising. If you fold, then you give up on the hand and lose your ante. However, if you raise, then you make another wager that’s the same size as the ante called the raise.

Along these lines, you’ll notice that there are two betting positions called “ante” and “raise,” respectively, and that’s where these wagers will be placed on the virtual table.

Betting is typically available at $1 to $100 per hand, but there is some variability of this based on where you’re playing.

Aces always count as a low in this game, and they count as one point if they’re by themselves. Likewise, face cards are always worth ten, and the regular cards two through ten are worth the respective amounts they show.

However, cards of the same rank whether they are a pair or three of a kind count as zero points no matter what the rank is. Likewise, if you have a run of suited cards (two or three), then they count as zero points as well. We want to point out that an ace cannot make a suited run with a king because aces are always considered low (i.e., as a value of one).

If you decide to raise and make the additional wager, then you’ll see the dealer turn over their cards to decide if they qualify. The dealer needs 20 or fewer points to qualify in this game.

When the dealer doesn’t qualify, then you’ll win 1:1 on your ante, but your raise will be given back to you as a tie or push, and that’s regardless of who has the lowest point total.

With that having been said, when the dealer does qualify with a score of 20 or below, then the point totals are compared, and the lower score wins. The ante always pays 1:1 when the player wins, but you can get extra payouts depending on your point total for the raise with hands with zero points getting 4:1 and hands of just one to five points earning a 2:1 win on the raise. It’s also worth pointing out that ties always push, so you’ll just get your wagers back.

In Realtime Gaming’s Vegas Three Card Rummy game, they mix things up by adding a bonus bet that you can make before receiving your cards. The result of your hand, whether you raise or fold, will determine your payout. A suited combination of A-2-3 pays out the largest available win of 100:1, but you can also get 25:1 for being dealt a hand worth zero points. Scoring one to six points pays 2:1, and your bonus bet is paid at 1:1 if you score seven to ten points. However, earning 11 or 12 points scores a win of 4:1, which is a bit out of whack with the rest of the table. If you score 13 or more points, then you lose with this bonus wager.