A 2019 release that comes via Betsoft Gaming, Viking Voyage belongs to a genre that’s been quite enjoyable for players over the years, using Nordic mythology and the warriors of the region for inspiration. It’s what this developer has done as well, taken the Vikings of Scandinavia and designed them in cartoon form, as warriors and explorers of the Atlantic Ocean. They also made sure to give you plenty of ways to win, 243 present on its 5×3 reels, along with high volatility and only average rewards, at best. All in all, a combination that’s not the best around, but it can work if done right. Let’s see if they managed that. 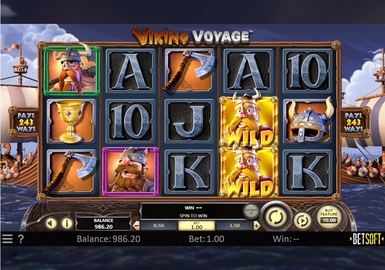 A Viking voyage, to explore, pillage and plunder, is in progress as you’re loading up the slot. You will find that there are pretty cartoon-style graphics inside, and if you focus mostly on the feature or high-value symbols, you should be quite happy with what you’re getting. Those have images of the Warrior King, of Ravens, Long Boats, about three different Viking Warriors, Goblets, Helmets and an Ax. You then get to the lesser symbols, the metallic-looking Royals, far less interesting to watch. As the Royals are the ones of low value, they’re the ones that show up most often to take a big portion of the reels, and they’re not very interesting.

Viking Voyage might not be the sort of game that can be expected to trigger its special features often, but it has several options for you to explore, and together they can help make its action a lot more interesting. Given that the game’s volatility is expected to be high, triggering features and getting paid is not something that comes easily, but the free spins, in particular, seem to have great potential.

Warrior King Wilds: One of the more basic features that the game incorporates, the wild symbol is the one showing us the image of the Warrior King. You will typically see it regular-sized, on the middle three reels, and from there it can be part of any wins which will form on lines where it is present. It’s going to be used as a substitute only, so there are no rewards of its own that will be paid as a result of its presence.

Warrior King Re-Spins: In some cases, when the wild symbol shows up on a full reel and covers all three positions available there, another feature will trigger, involving a free re-spin.

First, you will find that the triggering stacked wild becomes sticky, fusing the symbols together to become one large reel-sized wild. Next, follows a free re-spin of the other reels available. If you get an additional stacked wild on one of the other reels, then there will be an additional re-spin. This can continue until you get three re-spins in total, with three wild reels in the middle of the game area.

One thing that I didn’t like about this feature, is that you get only one re-spin at a time, even if you get 2 or 3 wild reels. The ideal way to get these wilds is one at a time so that additional re-spins can be won, but that’s not something that you can force, it’s completely random.

Free Spins With Multipliers: With only two reels to land on, the Viking Long Boat scatter might not be a very common sight, but the feature it can trigger has incredible potential when everything lines up just right. What you need, is for the 1st and 5th reels to get the scatter symbol at the same time.

In exchange, the game will offer you 10 free spins. To retrigger the free spins, the requirement remains the same, to have the two scattered Long Boats on the only two reels where they’re allowed, at the same time.

The biggest advantage of the free spins is that their wins are multiplied by 3x. This doesn’t require any special symbols, just that you form a combo, and the value paid will be tripled.

Besides the usual free spins, which you get by landing those scatters, there is also the possibility to gain access to this feature by paying for it. The Buy Feature option will be available in some jurisdictions, and it will have a price of 70x the stake. It’s looking a bit better than the regular free spins actually since you get 12 rounds here.

Overall, the feature doesn’t sound too bad, the multipliers do help in making it attractive, but experience has shown that payouts don’t go very high in this game, and even with that multiplier, you risk not getting your money’s worth if you decide to buy your access into it.

Raven Scatters: One more feature symbol is present in the game, the Raven scatter. Its only use is as a scatter, which will pay you when landing on 3, 4 or 5 reels. One of the notable things here is that a wild can act as a replacement for the Raven scatter, so a combination of these symbols will get you paid. Even if there are no Raven’s insight, if there are enough wilds present, you get a reward. The prizes are between 0.4x and 40x the stake.

Viking Voyage doesn’t have to be an expensive game, and in fact it can’t reach the same heights as other slot machines. The starting point here is a bet of just $0.10 per spin, while the upper limit is set to $10 per spin.

The payouts look interesting at first, with the base game capable in theory to pay up to 1,000x, and the free spins taking this up to 3,000x. Unfortunately, the game info provided by the developer mentions that its top jackpot is limited to only $4,713.15, which is the equivalent of about 471x the stake at most.

A low top jackpot would be fine usually, but the volatility is fairly high here, so the risk/reward ratio isn’t great. On the other hand, they do mention that the RTP is 96.12%, so it’s not an unfair slot machine, just not a very well balanced one (for my own preferences, at least).

Verdict: I’ve found Viking Voyage to be a fun option overall, one whose theme, graphics and features were appreciated. I can’t say that I enjoyed its potential as much, and the top jackpot of up to 471x the stake is a disappointment in a slot machine which should be capable of paying up to 3,000x the stake (during free spins). Since the RTP is above 96%, I understand why the limitations have been put in place, but I don’t have to like it.