Vikings go Berzerk slot is the second game that Yggdrasil Gaming released in a series and it’s thanks to the popularity of the first slot that we got this one a few years later. The reasons for that popularity are not only based on the Viking theme, but on graphics and features that are available. Once again, we travel onboard a Viking longboat, with four warriors as main characters, and we get to enjoy a great slot machine.

This particular slot will feature 5×4 reels, 25 active lines being present on them. As for the major features that were implemented, the list has: 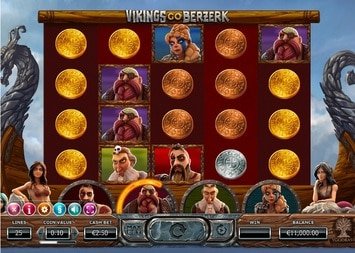 The theme is an old one, but quite popular, revolving around Viking warriors that use their longboat to travel the oceans. They go against evil Sirens in this case, and a pretty good game came out of the story that Yggdrasil put together. The symbols are with the four Vikings, four types of coins, treasure chests, and logos. It’s a good looking design, but some elements don’t look as detailed as in other Yggdrasil slots.

Want to see how Vikings go berzerk? Wager at least $0.25 for one spin and you might get to find out. If you can afford to spend more, the game will let you use as much as $5 for each fixed-line, and so the bet could make the jump up to $125.

It’s the game’s bonus features that deliver the best payouts, with the Golden Treasure chest giving away as much as 10,000 coins, which would mean $50,000 cash in this slot. The slot can actually pay up to $500,000 in one go, though not all from a single feature or combo. The announced RTP for it is one that we’ve seen in a lot of other slots, at 96.1%, so it doesn’t have any particular advantage there.

Don’t expect for this game to play like any other, and that’s actually something that made the first slot of the series popular. One of the most important elements in this game is the Rage that you collect every single time that you win with Viking symbols. There are four Viking meters at the bottom, which collect the Rage from their own characters. Once you fill up a meter, 7 free spins are going to be triggered with the Viking being put in Berzerk mode for the duration. The advantage of these crazed Vikings is that they always win when facing a siren during free spins.

7, 14 or 21 free spins can also be triggered via scattering symbols, which are marked appropriately and are showing the image of a Siren. There is a bonus feature offered along with the free spins. All Viking symbols also get a chance at being turned into sticky wilds for this feature, provided that they win against the Siren in a fight.

The bonus that comes with the free spins will be chosen at random. It could be that you get all Vikings to go berzerk, a sticky wild, a sticky wild reel, additional free spins or multiple treasure chests.

A simple Wild feature is provided as well, and it works like in every other game. Rely on it to form combinations of other types, but you will not trigger free spins through it.

Finally, there are two treasure chests that can appear. The 4th reel gets the regular one, while reel 5 gets the Golden Treasure Chest. The former delivers free spins, wins up to 1,000 coins and extra features for the free games. The latter has up to 10,000 coins to give away, free spins, a Rage Boost, Ragnarok Free Spins and various other extras.