Vikings Go Wild slot is one of the two slot machines that are now part of the Vikings Go series from Yggdrasil Gaming, its sequel being called Vikings go Berzerk, a title that was released in 2018. As for this one, the original, its release date goes back to 2015. When it comes to the game’s story, the title is pretty much self-explanatory, the entire action revolving around Vikings that do what they do best, fight.

For the 5×4 reels which occupy the game area in Vikings Go Wild slot, there will always be 25 active lines. Moving on to the features which were implemented, Vikings Go Wild gives you: 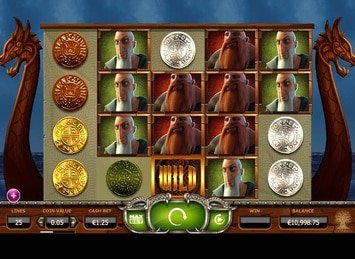 The story in Vikings Go Wild relies on the lives of treasure-seeking Viking warriors, so obviously in the main roles, you will have several of these heroes. Treasures, longboats and four types of coins will be among the rest of the symbols.

Setting up the bet in Vikings Go Wild slot requires that you choose only one thing, the coin value. Otherwise, you’re going to have to rely on 25 coins each time, so your pick will be multiplied by that number to get to the total bet. With a coin value of $0.01, the total would be $0.25. At the other end, go with a $4 coin and you could spend $100 per spin.

Certain features in this game promise to award payouts of 1,000 coins, and that’s the best possible win that you can get, at least from a single feature or combo. It’s worth $4,000 at most. The game pays up to $190,000 though, which I assume is if you have some particularly interesting series of free spins. Like most games from this company, the RTP is in the same range, is set to 96.3% here.

Play Vikings go Wild slot, and you can get some very interesting features out of it. At the basis though, you’re still looking at a very simple Wild feature, which you can see in this exact form in countless other slot machines. Basically, you can use the Wild to substitute for some other symbol, provided that we’re not talking about the free spins trigger. It’s a basic enough feature, but it does a lot to improve the profitability of your games, so I love seeing it in games.

Second, I suggest you also watch out for the Longboat scatter. It’s only valuable to you when it appears at least three times somewhere on the reels, but since it’s a scatter you don’t need it to be on a single active line as well. 8, 16 or 24 free spins are delivered by the game, based on the number of symbols that triggered the feature.

Once you get the free spins, any Viking symbol that appears could potentially be turned into a Sticky Wild. If that happens, the Sticky Wild remains in its position until you finish the free spins.

A particularly interesting symbol, which you will enjoy seeing, will have the image of a Treasure Chest. You only get this one on reel 5, and you only need it to appear once there. If it appears during the paid spins, you can win it 8 to 12 free spins or up to 1,000 coins. During free spins, its reward could be 2 to 4 free spins, up to 1,000 coins, or the Wild Reel feature.