Microgaming has had its fair share of branded slot machines over the years, and Village People Macho Moves Slot is one of the titles that appeared to have serious potential to be popular, given the inspiration used for its story. The basis for it comes from the Village People, a famous music band of the 70s, flamboyant and recognized for hits such as In The Navy or YMCA. Together with Fortune Factory Studios, the developer that worked with Microgaming for this slot, they designed some very interesting features and mechanics, to be used together with the slot’s 6 reels and 15 lines.

One of the things that makes this game special, its features section comes to us with options such as: 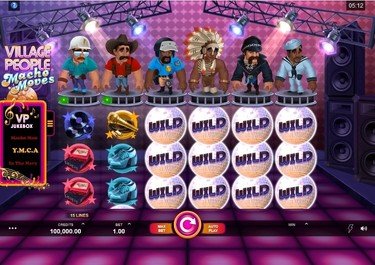 For a branded slot machine, such as this one, the theme is assured. In this case, we have a design that’s inspired by a disco group’s members. The Village People were famous at the end of the 70s and for much of the 80s. Some of their best hits included YMCA and In The Navy.

Fortune Factory Studios chose a cartoon-style design for this game, so at least we’re not looking at photos from the 70s, a plus in my book. It’s not a bad looking game, though perhaps a bit too cartoonish for my taste.

While we don’t have the six members of the band as symbols, they show up as patrons of sorts, each one associated with a different reel. As symbols, we are looking at white balls, VP Wilds, cassettes, microphones, vinyl records, sunglasses or dancing boots. Less valuable symbols take the form of the card suit icons.

There are a couple of basic special features present in Village People Macho Moves Slot, but for the most part I think you will appreciate the new options being introduced. The action is different enough from what you find in other slots. 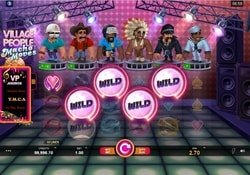 The regular wild symbol shows up with the image of a White Ball, and you get to use it in whatever new combination is forming on the lines where it’s present. 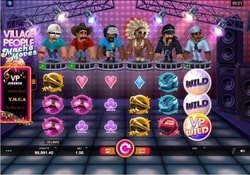 The second type of substitute present inside, the VP Wild will end up expanding and covering the reels it lands on, so that all three positions contribute as substitutes to new combinations. It’s even possible for you to fill the game area with these wilds, if they show up on all reels. 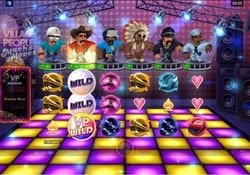 The reason why they went with a 6-reel setup is that the features demanded it, as there are 6 members in the band, and each one gets its own reel. You see them at the top of the reels, along with their own meters. Each meter gets filled by one position, for each new VP Wild that shows up in that column. Once you get five tokens in a meter, it will be full, and the free spins trigger. 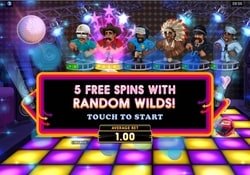 If the free spins trigger, through the VP Wild Meter, you get 5 rounds that you play through, along with the extra feature that is associated with the triggering character’s meter.

Reel 1 Construction Worker adds a multiplier from 2x to 20x, chosen at random for each spin.

Reel 2 Cowboy adds 2 to 2 extra wilds on the reels, each round.

Reel 4 Native American gives you two wild reels that will walk towards the left.

Reel 5 Biker will upgrade low value symbols to a single high value one.

Reel 6 Sailor offers 1 to 3 sticky wilds, each round.

Village People Macho Moves lets you use wagers as low as $0.20 per spin, and it will be enough to activate its 15 lines and spin its 6 reels. The option to wager more is also there, allowing you to spend a maximum of $25 on each spin.

While I enjoyed a lot of the features found in Village People Macho Moves, I wasn’t as excited when I saw what kind of top payout can be triggered inside. With 1,800x the stake being the highest that the slot will go for a single round, at most you can walk away with $45,000 from it.

On the other hand, it is a game with only medium volatility, which doesn’t typically drain your funds too quickly, and you actually get a decent chance of hitting some bigger payouts. Ultimately though, it’s still a slot machine which needs to bring a profit for the casino, so in order for it to pay someone well, a lot more players need to lose.

Verdict: Village People Macho Moves can be an acceptable game for a lot of casual players, which will enjoy the music, features and the medium volatility, which is coupled with acceptable rewards of up to 1,800x. It’s not going to be the type of game that all players will like though, as some just prefer much better rewards, and they’re willing to risk more for the chance at a big payout.