Wacky Panda by Microgaming is an animal-themed video slots game involving cartoonish panda mascots. It uses a cute theme that has proven to be a hit among casual players and a younger demographic of online gamers but has not made that big impact with the hardcore online slots audience. As expected, it’s filled with cartoon panda iconography. The biggest draw that Wacky Panda has it in the cuteness of its cartoon panda designs.

Some players might get turned off by the game because they view it as too generic or having gameplay that’s too simplified, but it does have several features that make it stand out in a good way. 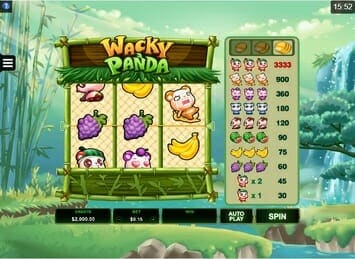 This retro-themed video slot machine game from Microgaming is a classic three-reel game with one pay line. Wacky Panda makes up for its simplicity with a charming theme that mostly appeals to casual players who find other online slot games as too complex to play, especially when you factor in elements like free spins, multipliers, wilds and scatters into the mix.

Game developers have done a phenomenal job in designing the game and filling it with cute pandas. Wacky Panda is a game that is reminiscent of a Japanese video game that mostly sells itself through adorable visuals and uncomplicated gameplay. The typical customization options for the game you can tinker with include Spin, Max Bet, AutoPlay, Audio, and Graphics Settings. The online slot can be played on both mobile phones and desktops/laptops.

Microgaming has developed several popular online slot games that are jam-packed with bonus features and intricate gameplay. You will not find any of this in Wacky Panda. In other words, this game has the most basic of gameplay and is a very uncomplicated online slot game that is no more complex than the bonus games you’d see in NES classics like Super Mario Brothers 2 or 3. Line up the slots until you get a favourable panda combination which earns you a payout.

Microgaming could have thrown in a few free spins or wilds to make the gameplay have more variance and flavour. Wacky Panda has only one pay line, no in-game bonus rounds, no progressive bonuses, the simplest multiplier system for payouts and low variance with every spin. In fairness, it at least has a sizeable non-progressive jackpot of 3,333 coins when you line up three of the highest-paying panda icons.

Players should not have any problem figuring out how to play Wacky Panda as the game is simple to understand. The reels have five panda types strewn across them. Just match the reels and receive a payout if you get three of a kind of certain symbols or one to two of a kind of special high-paying symbols.

The highest you can get is 3,333 coins, as mentioned above. The game does feature multipliers, but they’re limited to symbols that provide from 10x to 15x of your stake and do not feature any other complex multiplier systems present in most online slot games. Wacky Panda also pays out a decent wad of cash even though it lacks in the bonus department. You can play from 1 penny to £15 or go for free play if you want no-stakes gaming.