In Endorphina’s collection of games, a slot-like Wild Fruits will not have the best theme around, or not the most interesting one at least. It will sport a classic theme that will bring to the reels a lot of different fruit symbols and various other images that are considered classics, having been part of slot machines for 100+ years by now. The Wild Fruits slot game will do very well in other areas, as you will find out below.

First of all, the slot will feature 50 active lines, which are available on 5×4 reels, so on a fairly large game area which is not typical for a game with such a theme. Feature-wise, Wild Fruits slot has several on offer, interesting ones that should make the game more exciting: 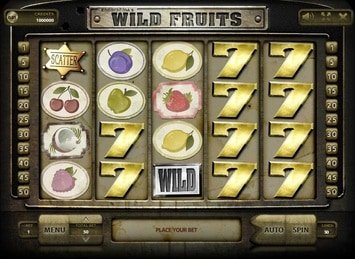 I mentioned it before, that the slot has a slight Wild West theme, in the form of the Sheriff Badge that is used for the scatter. The Wild is just a logo with a plate of steel behind it, and all the other images you see on the reels will be classics. The focus is definitely on the fruit theme. The Golden 7 pays the most, but after that, the images you see on the reels are of coconuts, watermelons, grapes, strawberries, cherries, plums, lemons, oranges, apples and raspberries.

Having a classic fruit theme is going to be annoying often enough, as the quality of the design tends to match the age of the theme. It’s not the case in this game though, even though they went with a retro design style for it. Rather than look like it was designed in the 80s or 90s, the fruit symbols used here look like they were hand-drawn by someone for a 50s era magazine, and they look great. It’s a high-quality retro style that should be used by a lot more developers for this sort of theme.

The list of potential features in Wild Fruits is not a very long one, and it’s not going to deliver exciting extras either, but it’s not quite the base offer that you’d expect from a 3-reel game or from a simpler 5-reel title.

To start with, you will often have a “Wild symbol” on the reels, trying to help you out in any way it can. This would be as a substitute, the symbol in question appearing only on the last four columns, and so it’s not able to form combinations with other wilds. Get it to appear next to regulars, and it will take the same role as they do so that you can get paid on that line. These wilds are not available as substitutes, where scatters, are concerned.

As for the scatter, it’s a logo that appears on a “Sheriff’s Badge”, so the game seems to have a bit of a Wild West inspiration to it as well. While appearing on the reels 1, 2 and 3, the Sheriff Badge scatter can give you 10 free spins, but you need all three triggering symbols in view. While you’re going through the free spins mode, the wild symbols will appear stacked on the last four reels, rather than regular-sized. This way, you will have additional chances of landing these symbols. Should another set of three scatters appear, while you’re already in free spins mode, then 5 extra spins will be added to the total, using the same initial bet value.

In some areas, including in the layout, it offers and its betting system, this slot is as far from a classic as you can go. Not only are you getting 50 active lines that you can use bets on, but the reels are bigger and you can have wagers as high as $500 used each spin. At its lowest, the wager can be reduced to as little as $0.01, if you’re OK with minimum bets and only 1 active line.

The line bet that you select for Wild Fruits will be applied with up to 10 coins, while denominations range from $0.01 to $1. All in all, you may spend up to $10 per active line.

Wondering how you can set up a bet in Wild Fruits? Understandable since the system is not very user-friendly. You need to click on the display areas that tell you the bet values, to change them, even though it’s not obvious that they’re clickable at first.

Once you start winning prizes, it’s the Golden 7 symbol that will pay the most. Its reward will reach a maximum of $10,000, which would be a 1,000x multiple on the line wager. RTP wise, it’s at the same 96% that is mentioned for all slot machines released by Endorphina.