The Win Sum Dim Sum slot by Microgaming is based on one of the most popular aspects of the Eastern culture – the food – and the combination of the great theme and graphics by Microgaming has ensured that this title has been very well received. The cuisine-themed game is a 5 reel, 9 pay line title that contains a range of exciting features, including wilds and scatters. The wild is represented by the game’s title, while the teapot scatters is representative of the scatter and players will want to make sure that they look out for both of these exciting symbols. 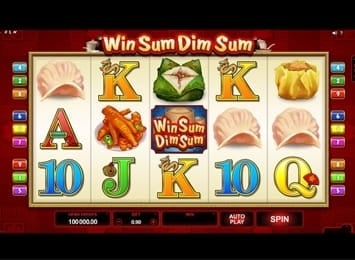 Players will likely be impressed by their first impression of the game, particularly with the bright and colourful graphics, which Microgaming is well known for, and they certainly have not disappointed when it comes to this game. The symbols are a mixture of food items, letters, and numbers, all brightly coloured and very appealing. The red background sets the scene very nicely and ensures that the game is more than inviting enough to draw a player’s attention.

Players can bet between 1 and 5 coins per line, and between 0.01 and 0.5 in coin size when playing the Win Sum Dim Sum slot, which makes for some sizeable betting possibilities. The slot also features an exciting jackpot of 100 coins, which means that players have something more to look forward to when spinning the reels on this thrilling game.

There are a few different bonuses on offer with the Win Sum Dim Sum slot. Firstly, players will definitely want to watch out for the teapot symbols, because when three or more of these scatters appear on the reels, the free spin round begins, and it starts with no fewer than 15 free spins. Players will be able to have the free spins feature reactivated during this exciting round, which only adds to the thrill, and allows them to increase their chances of winning many times over.

The game also features a wild card, which actually expands to give players the chance of winning even more. This card either expands on the third reel during the traditional game, or it expands on the second, third and fourth reels during the free spins round. Lastly, of course, is the jackpot, which players will be lucky enough to claim when five of the Win Sum Dim Sum wilds appear on the reels.

Players can start off by adjusting their bet before playing the Win Sum Dim Sum slot and they can do this by clicking on the “coins” and “coin size” to alter the number of coins they want to wager and the coin value. They will then be able to spin the reels by clicking on the “spin” button. The “autoplay” button lets players sit back and relax while the reels are spun a certain number of times on their behalf.

Microgaming’s new video slot might not have a unique theme, but the software provider knows how to draw a player’s attention and maintain it, so players will have a lot to look forward to when they choose to try their hands at this slot. The game does not only boast a great betting range, which is appealing to those who prefer to place somewhat larger bets, but it also offers a jackpot and this is something that can greatly increase a player’s enjoyment of the game. Overall, the Win Sum Dim Sum slot is another great title by Microgaming and will have players’ entertained for hours on end.