Review of Wonder Woman by Playtech

Part of an entire collection of superhero-themed slot machines that Playtech has released over the last couple of years, Wonder Woman Slot will feature the popular hero on its reels, along with many of the supporting characters that should feel familiar to many. The game was designed as a branded release, it’s an official title that has the blessing of DC Comics, and so it relies on comic book borrowed graphics for its higher value and feature symbols. What results is a superb game graphically, where Playtech tries its best to keep things interesting on the feature side. Before that though, what you get in this game is set up with 5 reels, where 30 active lines are in play and potentially profitable.

Part of what makes Wonder Woman an interesting option is the mix of special features that you will trigger inside: 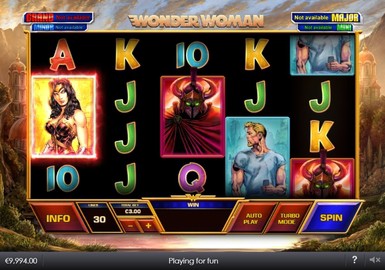 Wonder Woman is based on the similarly named slot machine from Playtech, and it features the DC Comics superhero, around with other characters from the same universe, both good and bad. Graphics-wise, the quality is excellent, and it couldn’t be any other way in a branded release which borrows its images from the comic book.

The symbols will have images of Wonder Woman vs Cheetah, Wonder Woman, Cheetah, Barbara, Diana, Steve, Ares and the usual mix of unrelated Royals.

Special features are going to improve the slot machine, and in the long term, it’s what will give it a bigger lifespan. It can get boring if you just spin the reels, round after round, with varying degrees of success. A good slot machine will manage to keep things interesting, using different modifiers, special symbols, and from time to time excellent bonus features with big potential. It’s what we see from Wonder Woman as well, a game which borrows from the comic book and gives us several options that are inspired by its characters.

Wild Symbols: Wild symbols can show up in a couple of variants. One of those will show the logo of Wonder Woman, and that’s the feature that you get most of the time since it appears on all reels. It can even pay its rewards, though for that you will need five appearing on the same line, to deliver a prize of up to 8.33x the stake.

The second wild symbol that you may get, is the one with The Fire. This one you can land on reel 3 during the paid spins, and on reels 2, 3 and 4 for the free spins.

4 Base Game Modifiers: One of the things to be appreciated about Wonder Woman is that the game takes care to keep the spins fun even in the base game. While a lot of developers will neglect that side of the slot, and focus only on free spins or bonus games, Playtech incorporated four types of game modifiers here, each one triggered differently.

The random option will come via Stacked Symbols, which will choose one of the high-value symbols to appear stacked for that one round.

The next three modifiers will come as a result of certain symbols landing on the reels:

Cheetah: requires the appearance of the Barbara symbol, on both the 1st and 5th reels, and it will transform the high-value icons into Cheetah symbols, increasing the odds of a big payout (Cheetah combinations pay 150x the stake, the most out of the regular symbols).

Wonder Woman Re-Spins: once again, you will need the right symbol, with Wonder Woman, in this case, appearing on the 1st and 5th reels. The re-spins which will come next to get only two types of symbols, either useless blanks or Wonder Woman. Once the re-spins stop giving you new Wonder Woman icons, the feature stops. Up to 1,000x, the stake can be paid, though you need all 20 symbols to be with Wonder Woman, to get that much.

Fire Wild: you only need one symbol to get this feature, a Fire Wild which needs to appear on the 3rd reel. A random high-value symbol from the reels is picked, to be transformed into wilds in all positions where it is present.

3 Types of Free Spins: The base game isn’t the only one that offers plenty of options. The free spins are also interesting, and there are three variants for you to get, at random. Unfortunately, you can’t choose for yourself which of the three types will be triggered.

As for the way to get into the free spins mode, the requirement is for the scatter (Wonder Woman vs Cheetah shown together) to appear on both the 1st and the 5th reel.

Wonder Woman Free Games: you start with 12 rounds, but there is the possibility to get more, either 3 or 12 extra if 1 or 2 new scatters show up. Either Aries, Diana, Steve, A, Q or 10, can be picked for each spin, to show up in super-stacked mode.

Cheetah Free Games: with 12 rounds that you go through, this feature will transform high-value symbols that are part of wins, into Cheetahs. They remain that way for the rest of the feature, and for the later rounds you may end up with excellent odds of triggering higher value combinations.

Fire Wilds Free Games: you get 12 free games here, during which Fire Wilds are present on the middle three columns. Whenever you get 1 to 3 of these wilds, 1 to 3 high-value symbols get transformed into extra wilds.

Jackpot Bonus Game: Every single game that takes us to the DC Comics universe, will also have access to the series progressive jackpots. These can be impressive, and there are four of them total (Grand, Major, Minor, Mini). Which one you get is decided in a Jackpot Bonus Game, to which you can get access at random, as you’re playing one of their slots. You are guaranteed to win something in this feature, though it could be one of the smaller prizes, not the top one.

Relying on 30 fixed lines for all its winning combinations, the game can start spinning its reels with wagers of only $0.30, in which case each one would get $0.01. The upper limit of its range is at $300, so $10 per line, which means that all types of players will be able to try it out.

There are several types of prizes that you could get, and which would be life-changing. One is the progressive jackpot, the Grand version of it, which can be won as a result of a special feature that you can be chosen to take part in.

The game’s payouts will go as high as 3,750x the stake for the free rounds, and up to 1,000x the stake during the Wonder Woman Re-Spins of the base game. For a game which has Medium volatility, I like the way they sized the top jackpots, there is good potential there.

What is less exciting about Wonder Woman, is the fact that the RTP for it is at 95.34%, while a lot of the more modern slots will be set to 96% or higher. It’s not specified if this figure includes the contribution of the progressive jackpot though.

Verdict: I think that Wonder Woman is one of the better superhero branded slots that Playtech has put out so far. It’s got the Medium volatility that will make it fun for a lot more people, while still delivering big top prizes. You also don’t get bored easily inside, as both the base game and the free spins provide you with a lot of variety feature-wise. The fact that it uses original comic book-inspired graphics is also a huge plus, as the images shown in the themed symbols are gorgeous.

Of course, it’s not a perfect game, and there are some downsides to it as well. Mostly, I’m talking about the RTP of 95.34% that I’ve seen announced for this slot, but I’m also a bit let-down by the presence of a lot of colourful Royals on the reels, which is what you see most of the time.

Overall though, I’d say that the pros outweigh the cons, and I would recommend you check out Wonder Woman, especially if you enjoy the comic book.