Review of Yak, Yeti and Roll Slot by Betsoft

One of Betsoft’s releases from 2018, Yak Yeti and Roll is a slot machine which both relies on certain features that are proprietary to their games, and one where the story is unique. I loved the design of this one, as well as the story of Yak the Eskimo and his Yeti sidekick, as they go across the snow-covered landscape in a sleigh which is pedal-powered. You get the usual high-end 3D graphics that Betsoft Gaming has become known for, in a slot machine which has 5 reels & 20 lines, along with several good features and rewards of over 4,600x the stake.

Several of the features included here were interesting, and the main ones I’d mention are: 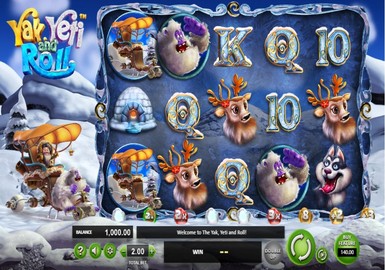 We’re going to the North Pole in Yak Yeti and Roll, and we’re meeting with an Eskimo and his trusty Yeti. They’re travelling in a special sledge, invented by the Eskimo (Yak), and we see the Yeti as he’s using its pedals to move it along the trail. It’s fun seeing the sledge advance on the trail, as the player gets lucky with wins, though unfortunately, you’re going back to the beginning once the combinations stop forming.

Design-wise, Betsoft knows what they’re doing, and the same 3D style that we saw them use in the past, will also be available here.

The game will be forming its winning combinations via regular symbols, 3 or more required to appear left to right on the same line. When combinations form, the Cascading Reels mechanic triggers next. This removes the winning symbols from their current positions, and then it will trigger a cascade of symbols from the top, occupying the positions which are now left empty.

Yeti Wild Symbols: These are your typical wild symbols, represented by the icon with Yeti, and it can only appear on the middle three reels. When placed there, it’s a replacement for other regular symbols, but not for Eskimo scatters.

Eskimo Scatter Pays: Have Yak the Eskimo appear on 2 to 5 reels, and the game will trigger cash prizes for you. These range from 0.25 to 12.50x the stake.

Snowmobile Trail: With each cascade that triggers in a single spin, the two main characters will advance on the Snowmobile Trail. The farther away on it you get within the same paid spin, the bigger the rewards and features that are triggered at the end. You need at least two consecutive cascades to win something, a small prize initially, followed by multipliers, free spins, free spins with multipliers, and even a jackpot of 200x the stake (for the 17th cascade).

The luckier you are, the better the rewards and features that will trigger at the end. Once you stop getting new cascades/wins, the trail position resets back to the beginning for the next round.

The value of the wins will also go up, as you advance on the trail, and you unlock the Cascade Multipliers. You get the 2x multiplier at the 3rd cascade, the 3x one at the 6th, 5x for the 12th, and then a 15x multiplier for the 15th cascade and those after that.

Free Spins: Access to the free spins is obtained via the Snowmobile Trail, mentioned above. A minimum of 7 cascades is required, to get 8 free spins. With more cascades, the number of free spins goes up, and then there are higher multipliers that you can get as well. At most, the game seems capable of triggering 18 free spins with 4x multipliers.

Cascading reels can keep triggering for the free spins as well, and if there are any multipliers there, then they get added to the ones from the feature (they’re cumulative).

For Betsoft slots, the betting system will often revolve around the same type of range. Yak Yeti and Roll is no different, and at the bottom, you will find a Total Bet area, where you can pick the amount that you want to wager, with the given range going from $0.20 to $20. $1 is the highest line bet that is possible then.

If you have a bigger budget, then a better idea might be to use the Buy Feature option. It costs 70x the regular stake, so between $14 and $1,400, but it gives you 9 free spins where a 4x multiplier is active.

A game with high volatility, Yak Yeti and Roll will also offer a Return to Player of 95.93% overall, but if you choose to use the Buy-In feature, this goes up to 96.54%, since there are only free spins with a higher multiplier there.

Verdict: Yak Yeti and Roll is an enjoyable game, and it’s not just a matter of having good designers. It’s also about the features that you’re getting, and the way you have that trip over the trail, activating features along the way. The slot’s got higher volatility and reaching the free spins or the bigger multipliers will not come easily, but if you want a game which is a bit more fun than the average title, then this Betsoft release could be a good choice.

Going beyond the excellent design, we find that the game relies heavily on cascading reels and on your luck, to get you access to even more features, so until that happens, you do have a lot of very similar spins. Very basic and limited wilds or scatters are available for most of the rounds, but what you’re looking for are the scarce ones.

Overall, It’s a game that I’d recommend, but the fun part comes rarely, and the volatility is high, so not everyone will have the patience for it.