The legends behind Yeti will have you believe that this huge creature can be found in the North American forests and that a lot of people have seen glimpses of it, or at least of the footprints that it leaves behind with its huge feet. This huge hairy creature hasn’t gotten a lot of love from slot machine developers so far, but we have a game that does that right here, and I have to say that Thunderkick did an awesome job with it.

Yeti: Battle of Greenhat Peak slot will deliver on its 5 reels 11 active lines, not a standard layout by any means, but not that far away from what a regular slot will give you either. As for its features, the game has: 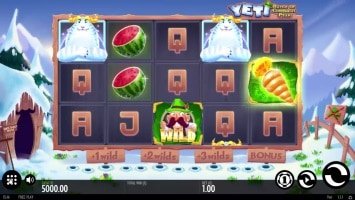 Featuring a battle of sorts, between a golden-horned Yeti creature and a man sporting a green Bavarian hat, this is anything but a regular slot machine. It’s got a bit of comedy inserted into it as well, and overall I found it quite enjoyable to play.

A couple of the symbols which were used have a connection to the theme, but most of them don’t. Besides the images of Yeti, the Bavarian man or the Golden Carrot, everything else is either a classic fruit or a playing card. Even so, I was impressed with the quality of the design.

The game’s action revolves around two characters, a Bavarian man with a green hat and the Yeti. The Bavarian Man is the one that’s getting to act as a feature as well. It will be the wild symbol, and at the same time, it is going to form winning combinations by itself when it can. Expect to get paid well when up to five line-ups on one of those active lines, since the wild pays the top jackpot of the slot. Naturally, since you’re looking at a wild feature, it’s usable in all sorts of regular combinations of symbols, substituting for whatever you need in the exact position where it landed. There is only one exception, and that’s the Bonus symbol, for which the wild can’t act as a replacement.

The Bonus symbols are easy to spot, their image being of a very unusual Golden Carrot that was designed to look like a drill almost. These symbols are scattered, so you make use of them whenever you get at least two on the reels. The outcome will be different though, with the Wild Attack requiring two bonus symbols, while free spins are triggered when you get three or more.

A Wild Attack will give you one of two possible outcomes, being picked at random. You might get a respin with 1 to 3 sticky wilds present on the reels for it, or you could get the bonus game with 10 free spins. The wild symbols that are not used in any winning lines are transformed into sticky wilds for the feature that comes next.

Should the Bonus feature be triggered, either through 3+ bonus symbols or through the Wild Attack, it will give you free spins. 10 to 20 free spins can be obtained from 3 to 5 Bonus symbols. Once you enter these spins, each new Bonus symbol that you get will activate the Wild Attack meter and increase it by one step. You receive one sticky wild at random and 2 free spins, for every 3 bonus symbols. Once you get the meter filled, you receive 5 additional free games. This feature can deliver at most 31 free spins. Any wild that might land on the reels is locked for the remainder of the feature.

Thunderkick’s slot machines have their own way of doing things, particularly when you have wagers to cover. Their games deliver unusual numbers of paylines, 11 in this case, and they have betting ranges that have fixed values. As in every other Thunderkick slot that I’ve seen, Yeti has a minimum bet value of $0.10, and a maximum one of $100. There are about a dozen other values to choose from, between those two.

Once you’ve selected the wager that you want to use, the paytable will automatically reflect the prize values that you can win. Check out the Bavarian Man or Yeti for the big prize of Yeti: Battle of Greenhat Peak, set to $3,500. Both symbols can deliver that prize. With no multipliers used, and with 11 active lines that can get just as many wins, a single winning spin of this game could deliver a top reward of $38,500.

RTP wise, it’s giving you what you’d expect from any slot machine, being set at a reasonable 96.1% (long-term results).