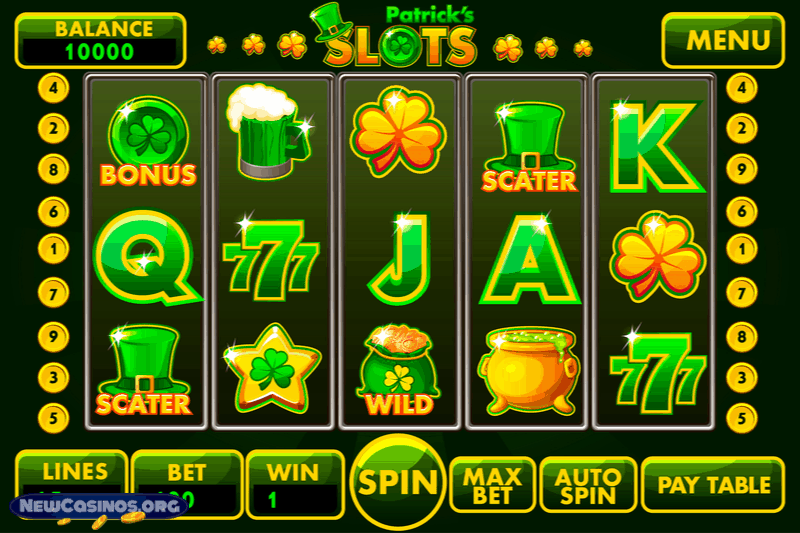 Once you have been around online casino sites for a while and online video slots, in particular, you may start to notice something of an oddity – that there so many Irish themed online slots. If you head to new Irish casinos, UK casinos or even Canadian online casinos, you notice the same thing – lots and lots of slots are based on aspects of Ireland, including leprechauns, rainbows and pots of gold.

We are going to run down the Top 10 Irish themed online slots for you, but before we do, here’s an explanation as to why there are so many of them …

Why are the Irish Considered Lucky?

There are so many Irish-based slots because gambling is associated with luck, and people from the Emerald Isle are considered to be lucky. The question is … why?

It is thought that the phrase ‘Lucky Irish’ originated in the mid-to-late 1880s in the USA. During that period, many immigrants would travel to States to dig for gold, including plenty of people from Ireland. The Irish worked hard to dig for gold – much harder than the Americans – and became incredibly successful at finding the shiny gold medal. The jealous Americans would claim – falsely – that the success of Irish immigrants was down to luck as opposed to hard word, hence the phrase “The luck of the Irish”  was born’!

And now, without further ado, here’s our rundown of the Top 10 Irish-themed online slots.

As we have proven, the words ‘Irish’ and ‘Luck’ generally go together, and none more so in this slot from Playtech which features a buxom beauty! It’s an entertaining 5-reel game with 30 paylines and a jackpot of 10,000 coins. It’s a brightly coloured slot, and of course, that ubiquitous rainbow with the pot of gold at the end makes an appearance. Watch out for the lucky horse shows as well!

You’ll be wanting to play this Random Logic slot for riches, whether they are Irish or not! Here we encounter our first leprechaun, and quite a lazy one at that as all he does during play is sit outside his mushroom-house and watch the reels spin. Look out for the leprechaun free spins and the ‘Crock of Gold’ bonus.

Stumpy Doodles is one of the most recent additions to our list of the best Irish slots having been released in 2019. Created by Foxium, the slot was actually released through the Microgaming brand. This slot believes in gender equality as Mrs McDoodles makes an appearance too. There are lots of special features, including super-sized symbols, random multipliers and respins. You can win as much as 2,000 times your total bet.

It’s amazing how many ways online slots manufacturers find to put the words ‘Rainbows’, ‘Irish’, ‘Luck’ and ‘Jackpots’ together to complete the title of their latest Irish-themed slot release. This is another game with a leprechaun, and here he’s not too careful about his health as he smokes a pipe. The good news for you is that each puff of smoke the leprechaun exhales, it releases a mystery beneficial symbol onto the playing grid.

The original Irish Eyes were one of the very first Irish-themed slots that were ever released. It was also a bit of a classic, but sadly now seems a bit ancient when compared to the latest online slots. NextGen Gaming followed up their original in 2014, and even though that slot is beginning to look a little jaded too, it’s still very playable. The ‘Irish Eyes’ mentioned in the title means, of course, that they are emerald green in colour.

We can’t believe that this is the first time we’ve mentioned Blueprint Gaming on this list, as they are truly one of the kings of slots, especially in the UK. Slots o’Gold is one of their forays into the UK slots market, and has everything you’d come to expect from an Irish-themed slot – rainbows, pots of gold and of course, a cuddly leprechaun! The lucky symbols here include horseshoes, four-leaf clovers and harps.

There are so many leprechauns in the world of online slots that it’s only natural for one to have gone a little bit batty. This nutty slot from Play’n GO has a whole team of leprechauns ready to promote mischief across the reels. Don’t panic though – when the ‘Leprechaun goes to Hell’, it’s usually to your benefit!

[3] Wish Upon a Leprechaun (Blueprint Gaming)

Of all the slots on our top ten list, perhaps Rainbow Riches (originally by Barcrest, but now released via SG Digital) is the most famous and perhaps even the most successful. It’s even spawned two sequels – Rainbow Riches Pick ‘n’ Mix and Rainbow Riches MegaWays slots. It even has its own casino! The original game is perhaps the best, with the chance to win up to 500 times your total stake.

NetEnt is number one in most aspects when it comes to online slots, so it’s only natural that they contribute the number one spot on our list. Finn & the Swirly Spin introduced a brand-new concept to slots as symbols would swirl around the grid as opposed to reeling them in. You can watch as symbols vanish to see if the luckier symbols make it all the way to the centre. This game has been such a success that a sequel – Finn’s Golden Tavern – was released in 2019!

Whether you are Irish or not, and whether you consider yourself to be lucky or not, remember always to play slots or gamble in any way responsibly, and never risk money that you cannot afford to lose.