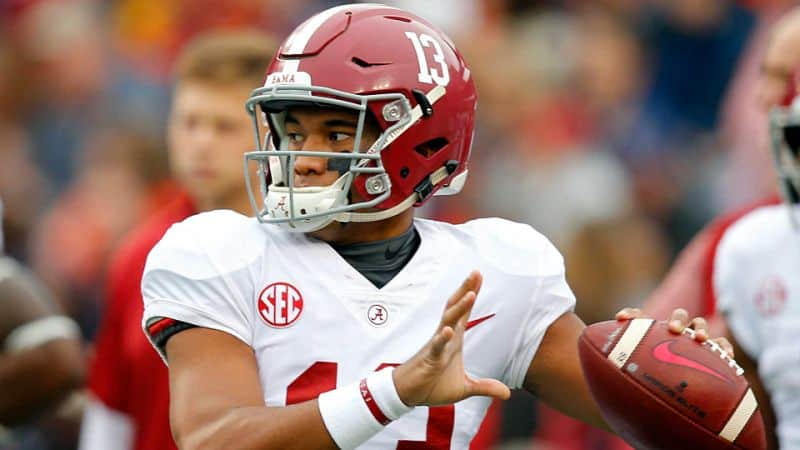 The 2018 NCAA Football season will begin next month, with teams heading into training camps later this month. There is no shortage of high profile players heading into the season, with another great crop of quarterbacks ready to lead their respective teams. Unlike recent years, there doesn’t appear to be a clear favorite to win the 2018 Heisman Trophy. Let’s take a look at the seven players with the best preseason odds.

Wisconsin sophomore, Jonathan Taylor, comes in as the early favorite to win the 2018 Heisman. Taylor put up huge numbers last season as a freshman at Wisconsin, and should only improve this season. Taylor averaged 8.1 yards per carry last season, and scored 13 touchdowns for the Badgers. Wisconsin brings back the bulk of their offensive line, which should help Taylor to another great year.

Another talented running back, Bryce Love, comes in with the second biggest odds to win the Heisman. The Stanford Cardinal finished second in the 2017 Heisman voting, behind Baker Mayfield. Love hopes to lead the Cardinal back atop the the Pac-12 rankings.

Alabama backup quarterback, Tua Tagovailoa, checks in third on this list. Oddsmakers must believe that Tagovailoa will win the quarterback job, beating out Jalen Hurts, to start for the Crimson Tide this year. Tagovailoa showed what he is capable of in last year’s National Championship game.

True freshman, Trevor Lawrence, is expected to win the starting job for Clemson this season. Lawrence was the highest rated quarterback in the 2017 recruiting class, and quickly made a name for himself at Clemson. The Tigers have a great shot of going undefeated giving Lawrence a big edge in the voting.

Jake Fromm nearly led the Georgia Bulldogs to a national title in his first year at Georgia. Fromm is a very talented quarterback, and playing in the SEC will help his odds tremendously. If Fromm can get the Bulldogs back into the College Football Playoffs he should find his way to New York City for the awards ceremony.

Dynamic quarterback, Khalil Tate, burst onto the scene last season and now is one of the favorites to win the Heisman Trophy. Tate rushed for a record 327 yards in a single game last season, and has drawn comparisons to Johnny Manziel. Tate should benefit from new head coach, Kevin Sumlin, in 2018.

Ohio State is expected to contend for a National Championship this season, and running back J.K. Dobbins is a big reason why. Dobbins averaged 7.2 yards per carry in 2017, and should carry more of the load for the Buckeyes this season.

Bold Prediction: Tua Tagovailoa will win the starting quarterback job from Jalen Hurts early on in the season. Nick Saban knows that the Crimson Tide are more dangerous with Tagovailoa as the starter, and the sophomore should lead Alabama to another National Champpionship. In the process, Tagovailoa will win the 2018 Heisman Trophy, with Bryce Love finishing as the runner up in a second straight year.