Evoplay Entertainment was founded in 2003, by several entrepreneurs, and it’s a company from Ukraine that has expanded to many countries, particularly if we’re talking about the ones where they’re present with their games. More than 110 titles are offered right now, and they’re adding to them rapidly, launching several new titles each month. What’s most impressive, is that they have absolutely gorgeous slot machines, which take time to create, and that they do just as well in giving the player fun features and unique themes.

Their headquarters appear to be in Malta, but they have offices in the UK and a development team which is working out of Ukraine. We’ve found their games at casinos from about 35 different countries, though they’re better represented in some, compared with others. For example, there are only a couple of casinos which have their games in the UK. In contrast, Germany has 118 online casinos with Evoplay Entertainment titles, Finland has 99, Canada 68, and so on.

As for the gaming licenses which are being used by Evoplay Entertainment, their main one was from Curacao until recently, but since 2019 they also added licenses from UKGC and MGA (Malta’s Gaming Authority), which are much more respectable.

EvoPlay Entertainment has been in this industry for more than a decade, but their own slot machines have really started coming out in force only since 2017. They’ve made a major push into the online gaming industry with their games, and the biggest move of all seems to be the VR-friendly 3D slot machine that they launched and presented in 2018. Designing some of the best-looking games that you’ve seen anywhere, they now offer a range of slots and table games, as well as instant titles.

As a developer that started work on its collection of slots only in the last couple of years, they made sure that everything they put out is modern and uses the latest technology. Their games look great, and they deliver Full HD graphics, which are fully adapted for mobile or tablet screens.

Their current collection of games has 110 titles in it, which will include a majority of video slots, with 79 titles. They also have roulette games (2), card games (9), dice (2), scratch cards (2) and other instant titles (16). No matter if you’re looking at an instant game, a table game, or a video slot, the graphics are always gorgeous.

I like a lot of things about the experience that their games are offering. Still, I’m not especially happy about the relatively low top jackpots, even for the slots which have high volatility. On the other hand, the RTP always seems to be somewhere around 96%, so there is nothing nefarious going on, it’s just the way they build their games, with plenty of features, but only average payout limits. 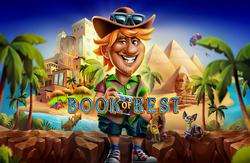 One of the games that I’ve noticed to be among their most popular, Book of Rest is actually their own take on the popular Book of Ra slot. That being said, they’ve put their own spin on things, and they not only designed probably the best-looking Book-style game, but they also used some extra features in it. Those extras include respins and three types of random events (Miracle Reflection, Sticky Line and Mixing).

The setup delivers more lines as well, 20, for a game area which holds 5×3 reels. Wins of up to 2,000x the stake appear to be the target in this one, each line paying up to 100x. Medium-high volatility and a 96% RTP signal a game that could work for a player that likes the risky Book-style slots, and is willing to take on a bit of risk. 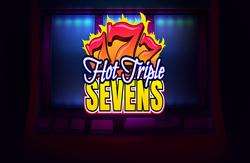 Fans of the classics are going to find Hot Triple Sevens to be a good one to try out, particularly as it adds modern features which include multipliers, to a fruit-style design that has only 3 reels and 5 lines to work with. The graphics are definitely not up to the usual standard that Evoplay Entertainment got us used to, and yet it’s one of their more popular titles.

With a limited 3-reel setup, but with free spins where 3x multipliers will boost wins, it’s not a surprise then that it can offer more than 3,000x the stake as a result of a single round. Once again, a medium-high volatility option, and one that has a 96.10% RTP. 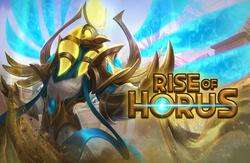 The Ancient Egypt genre is filled with great games, even if the theme tends to get repetitive at some point. Rise of Horus is an example of that, a slot machine which has 5×3 reels, a total of 243 ways to win/lines, and which can deliver a jackpot worth up to 4,905x the stake. Volatility is once again rather high, but so is the RTP, set to 96.10%.

You might start with 243 ways, but there are free games inside, which will bring the total number to as much as 16,807 ways. Reel expansions are used for that game mode, a mechanic that is increasingly popular with new slots.

If you’re looking for great games, which have gorgeous graphics and are a lot of fun to play, Evoplay Entertainment seems to be an excellent choice. Their games collection is one of the best I’ve seen, both when it comes to design and special features, with an accent on the former. Easily accessible on all types of devices, usually higher on the volatility scale, but also with decent rewards for the most part.